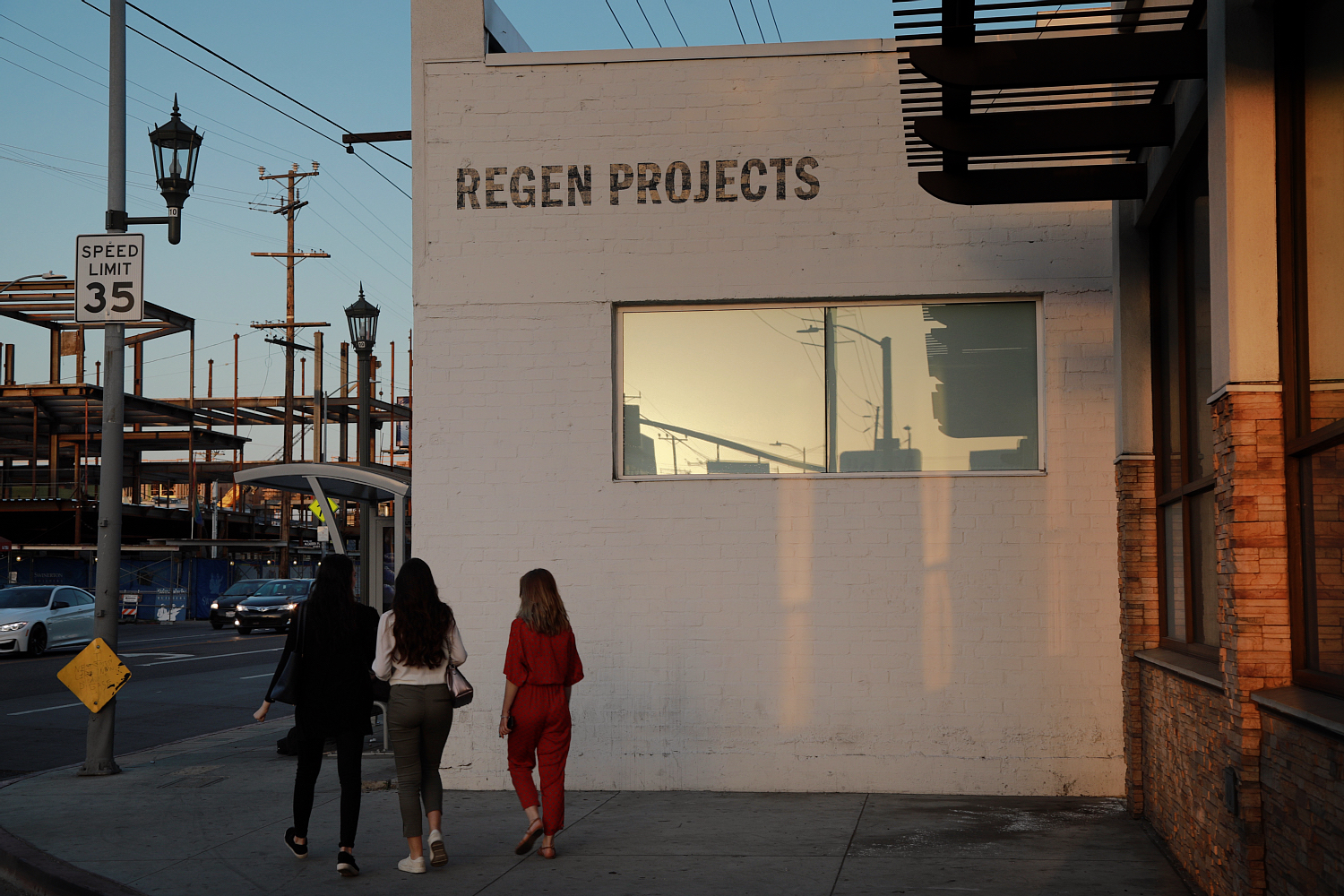 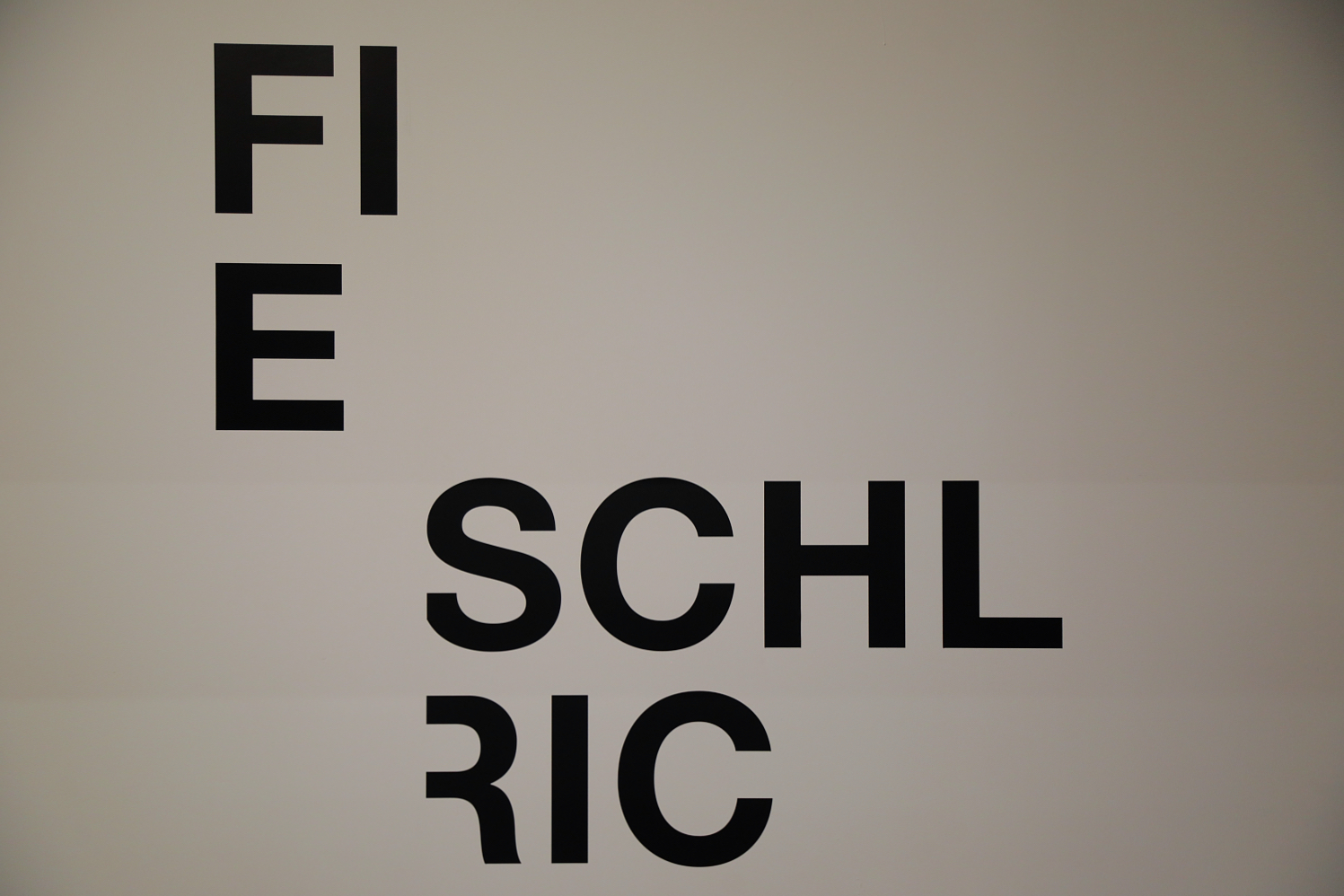 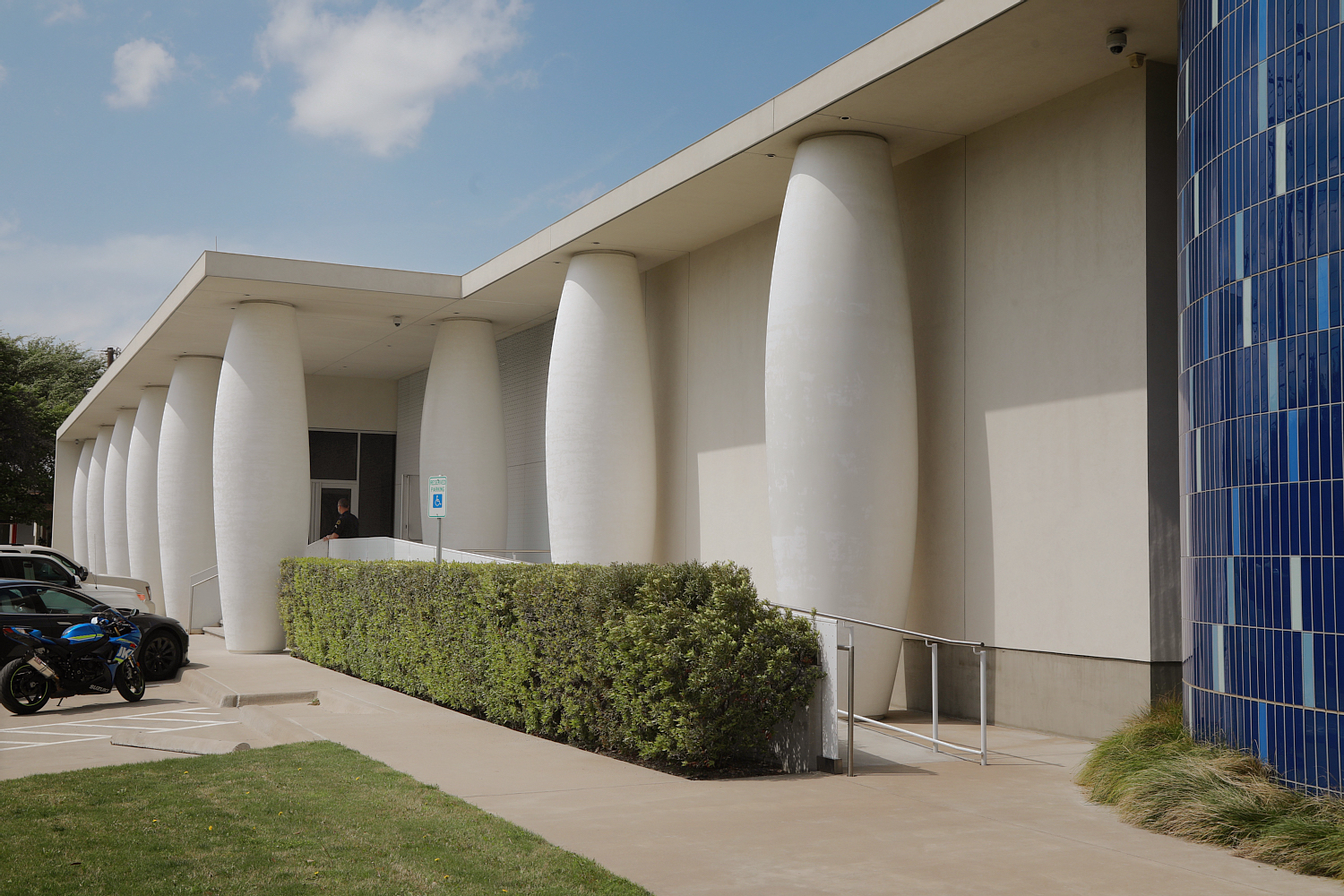 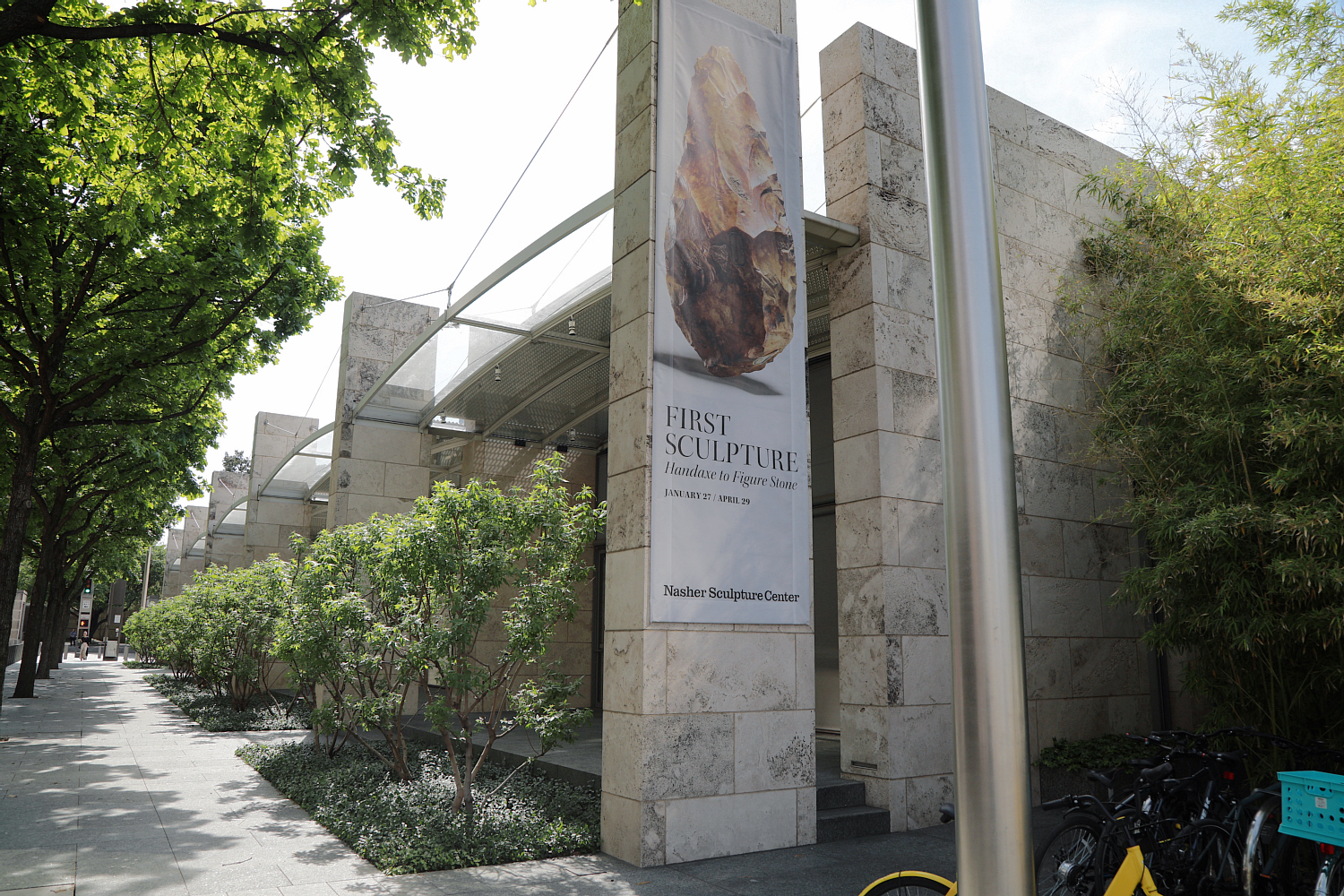 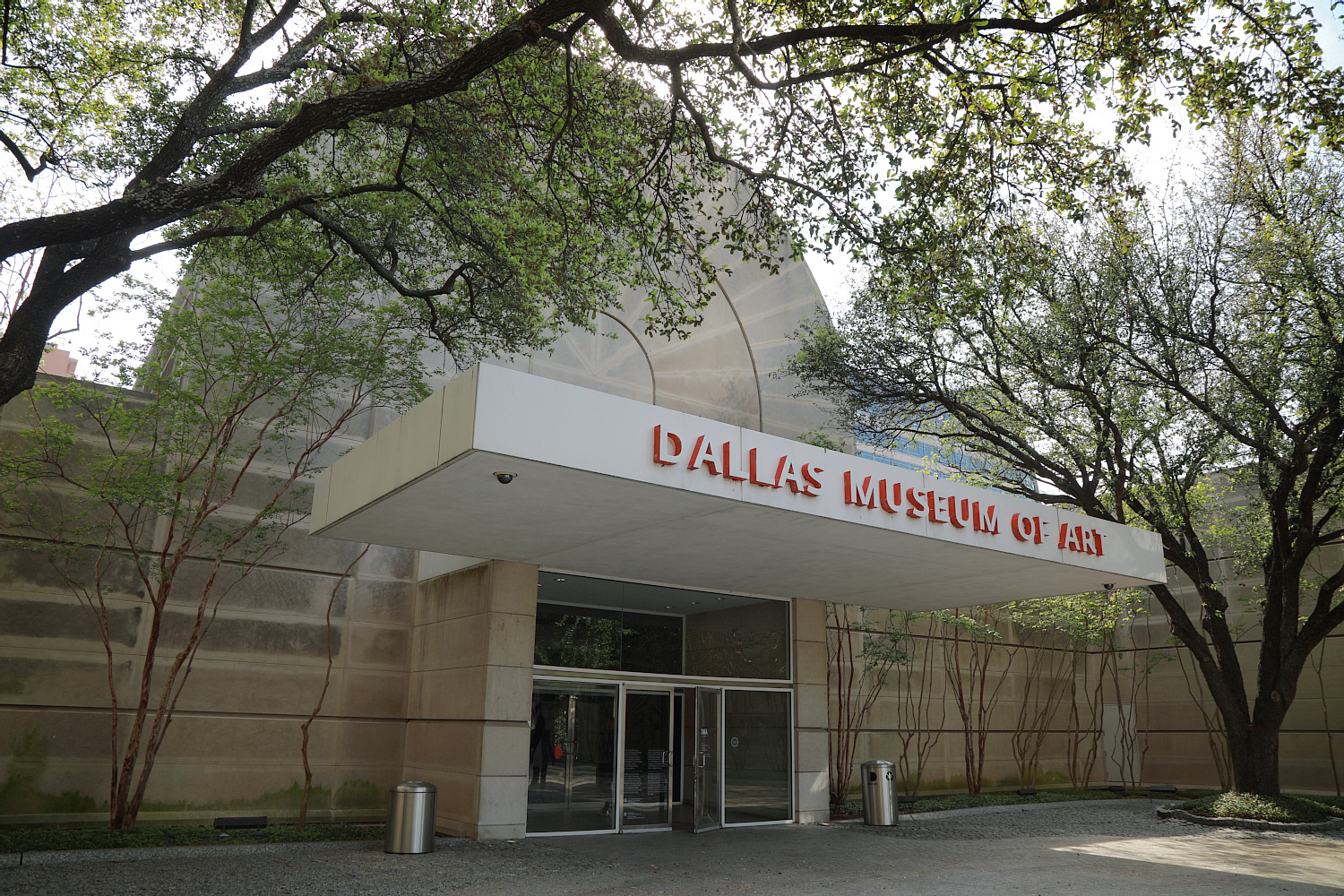 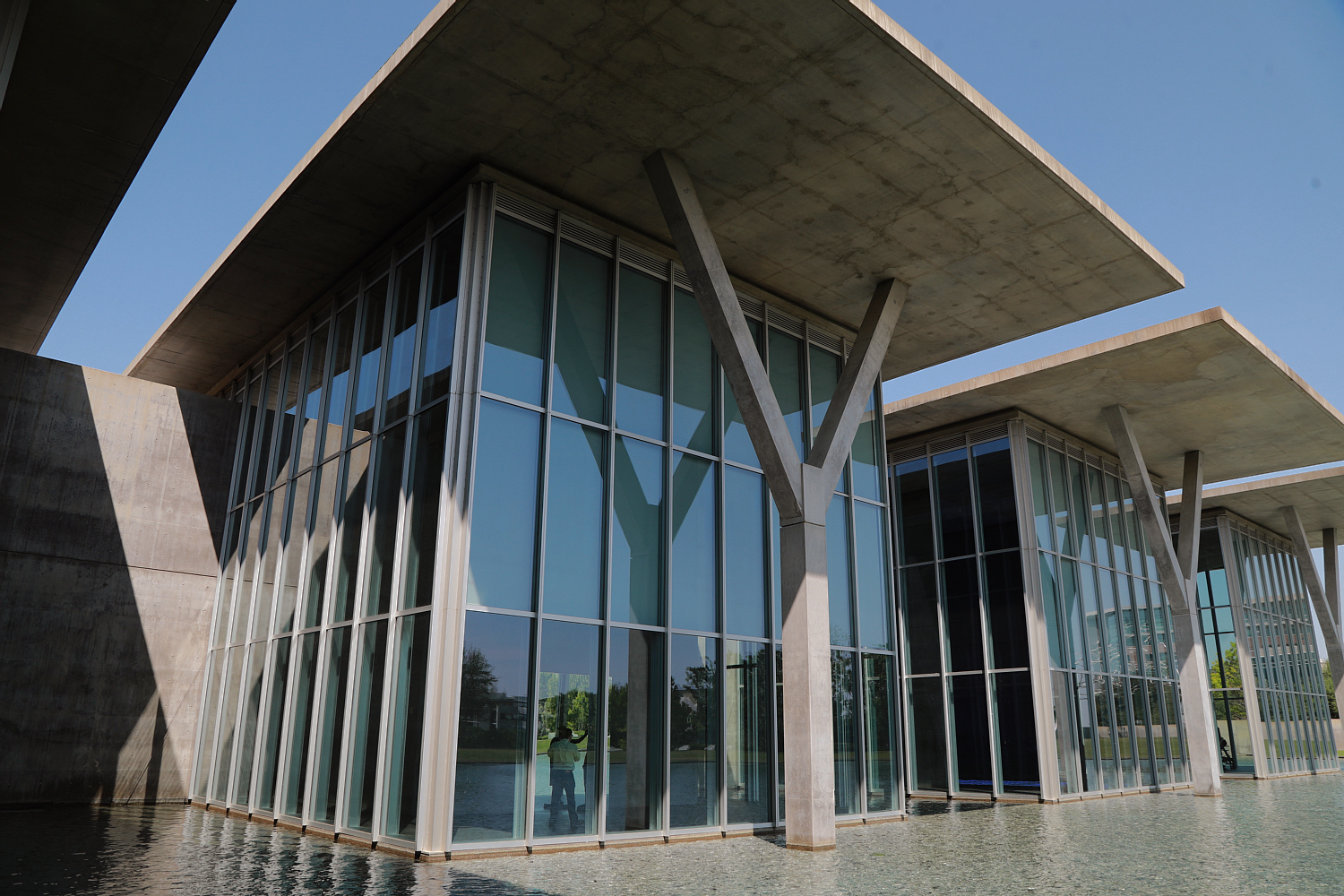 Photo Survey of The Modern Art Museum of Fort Worth. Dallas, Texas. Photos 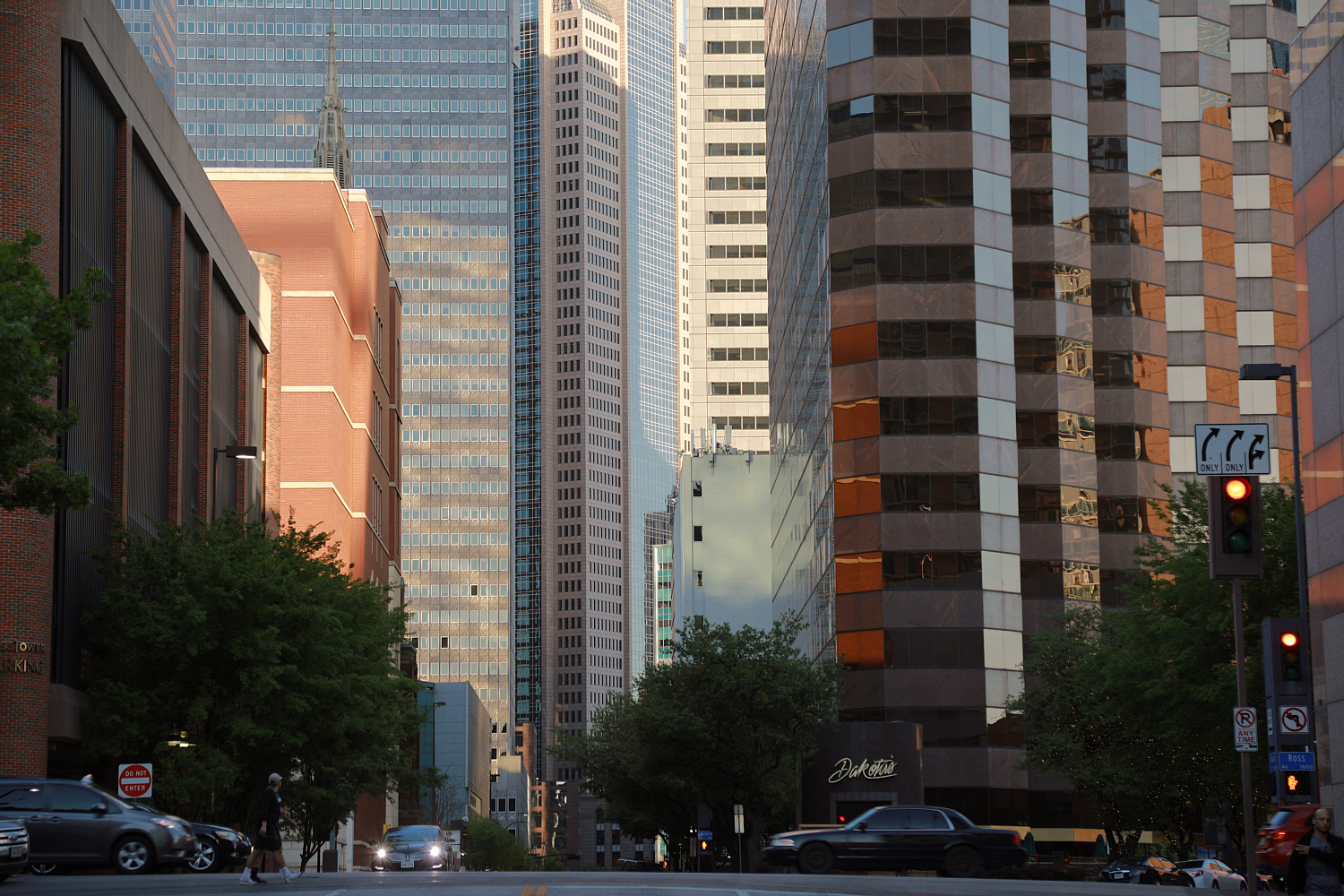 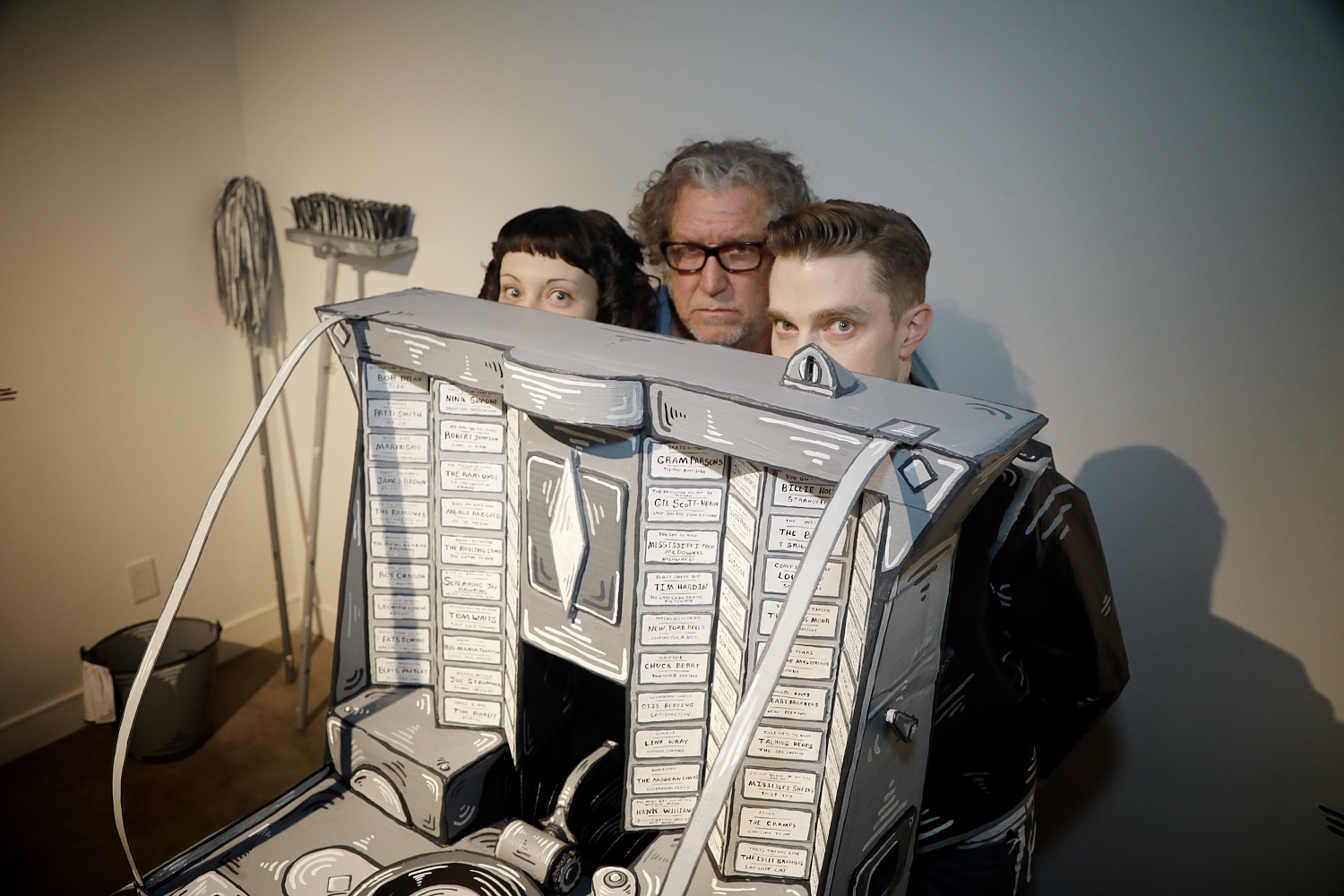 INTERSECTIONS:
DOSSHAUS AND THE AMERICAN DREAM

“Turning the corner into Gallery 2 at Downtown LA’s Corey Helford Gallery, the viewer is immediately confronted with over-sized, monochromatic letters in a sketchy hand-drawn font. It appears to be a hotel vacancy sign, yet this one offers something else entirely… VAGRANCY. Entering the gallery proper, one is immediately transported into the lobby of a flophouse hotel. Everything is in place: the front desk, with guest book and small rotary fan; the row of resident mailboxes and rack of hanging room keys; the elevator doors, the ratty chairs; the television. One could half expect to bump into Kerouac or Bukowski, or perhaps a Warhol superstar, Patti Smith or Sam Shepard. Yet everything in view, from the walls to the furniture to the elevator doors to the room keys themselves, are painted in the same sketchy monochromatic style, giving the viewer the feeling that they have stepped out of their known reality and into a two-dimensional drawing come to life. It is only on the closest inspection does the break from reality become irreparable. Every object in this lobby, and in the rest of the hotel for that matter, is an individual sculpture, meticulously crafted out of cardboard and hand-painted in a palate which ranges from black to white and every shade of grey in between. Though there are touchstones marking the familiar, this is a completely fabricated alternate world. This is the world of Dosshaus.

Dosshaus is the creative collaboration of Zoey Taylor and David Connelly, artists whose work blends painting, sculpture, photography, fashion, video, and performance. From the outset, the pair has been interested in the intersection of high and low culture. Responding to a society saturated with social media-generated images in which reality itself seems more and more relative, Dosshaus explores the impact the emerging culture has on the way people view themselves and their place in society. They seek to create something out of that culture – a substitute reality that selectively accepts and rejects the conventions placed upon them individually as people and collectively as artists. They use recycled cardboard, paper, acrylic paint and glue as their primary mediums to fashion their own highly idealized universe. The works themselves invert the very idea of the readymade. These are highly manipulated, sculpted pieces that give the illusion of everyday objects from an alternate, animated dimension. This cardboard world is at once separate from and a comment on our modern culture.

Their 2016 show at Gregorio Escalante Gallery dealt with issues of fantasy and domesticity, eliciting a cockeyed dream house with a massive surreal banquet table spread, idealized garage band instruments, and a classic car. Increasingly, the artists have used their medium as their message. In their 2016 appearance at the Taos Arts Festival in Taos, New Mexico, Dosshaus installed a full-scale cardboard phone booth along a busy pedestrian street. The artists described their intent to disrupt the space by “drawing” the phone booth into reality as a “ghost of a time when there was such a thing as private space within a public place.” Their 2017 feature installation at the LA Art Show, entitled The Artist’s Room, hearkened a large fantasy creative space filled with tools that would inspire artists of all mediums. It was both a whimsical nod to the joys of

all forms of creativity and, by virtue of the fragility of their chosen medium, a comment on the lack of affordable creative space in that city. Perhaps this space was another “ghost from the past” drawn into the modern day.

This is not to suggest that the artwork is nostalgic. Dosshaus is an experiment in duality: past and present, female and male, humor and contemplation, childhood and adulthood, trash and beauty. The tension between these aspects is what gives their work its energy. Everything Dosshaus creates is about altering the concept of reality. Each individual sculpture, when placed into a real-world setting, gives the illusion of a two-dimensional drawing inexplicably sprung forth into the third dimension. When multiple sculptures are grouped into an installation, the sense of reality is completely subverted by giving a viewer the ability to step inside a drawing come to life. In their photography, Taylor and Connelly frequently appear within an installation, interacting with the objects in the cardboard world around them as a surrogate for the viewer. The message is clear. This isn’t simply a drawing or a photoshopped image. This is reality, at least a fractured and highly subjective form thereof.

Given their interest in exploring duality, it seems only fitting that Dosshaus would one day set their sights on America itself, a place fraught with crossroads and contradictions. The result is the Paper-Thin Hotel at Corey Helford Gallery. Ostensibly a voyeuristic peak into the lives of the denizens of a low-rent residential hotel, it is also easy to see the installation as a treatise on the country in which this fictional hotel exists. Just past the lobby, viewers are able to wander through four hotel guest rooms. Each room is a completely different environment, and the sculptures collected within suggest a narrative about its inhabitant.

Room 101 is the honeymoon suite. Amongst many signifiers of carefree romantic love, the careful observer may find a stash of money and a gun. Are the two lovers also criminals on the run? The freewheeling fun of the counterculture films of the 1960s and 70s come to mind. Yet seen through a modern lens, one can’t help but wonder if we, as a society, have lost something in the erosion from that era’s “I’d do anything for you” romantic ideal to today’s decidedly less committal version, “swipe right.”

Room 103 implies the harried life of a travelling musician/writer, stretched out on the road in search of inspiration. This room has a direct lineage to Dosshaus’ “Artist’s Room” installation. This artist is forced to reside in this flophouse hotel because they can no longer support themself with their art, a fate that has befallen countless creatives in the social media age.

The final room, 105, is by far the most fantastic. The ornate hanging chandelier, birdcage, and numerous objets raffine?s indicate the inhabitant is both financially affluent and tastefully eclectic. At first glance, this room may seem out of sorts with the others on view. It is only on the closest inspection that the connection becomes more obvious. Prescription pill bottles and an exquisitely rendered cigar box containing heroin works

suggest the narrative of a wealthy debutante ensnared by the country’s ongoing opiate crisis.

Each of these rooms is separated by a thin, cardboard-covered wall. They are the literal representation of a flophouse hotel’s “paper-thin” walls, and ostensibly the objects from which the show takes its title. There is no illusion of privacy within this hotel. In that, the hotel can be seen as a metaphor for a modern world in which seemingly everyone is only a Facebook friend or Instagram follower away. Our walls are thinner than ever. Additionally, with the myriad cardboard variations on artifacts that once served as the foundation of American culture, one can’t help but wonder if the real things are anything more than a paper-thin illusion.

And yet this is by no means a dour exhibition. Quite the opposite. The Paper-Thin Hotel is a glorious celebration of stuff. There is joy in every meticulous detail on view, and one is free to lose themselves, albeit momentarily, in a fantasy land devoid of the real-world trappings of politics, judgment, and consequence. Dosshaus is clearly enamored with the hotel dwellers they’ve created. This could be because the characters, as signified by the objects that surround them, represent different aspects within the artists themselves. As such, Taylor and Connelly will appear at set times within the installation, performing the role of one or more of the characters. This is a departure for the duo, who previously appeared only as versions of themselves within their work. One gets the sense that the Dosshaus universe is ever expanding. And beyond this intersection, there’s an open road ahead.” 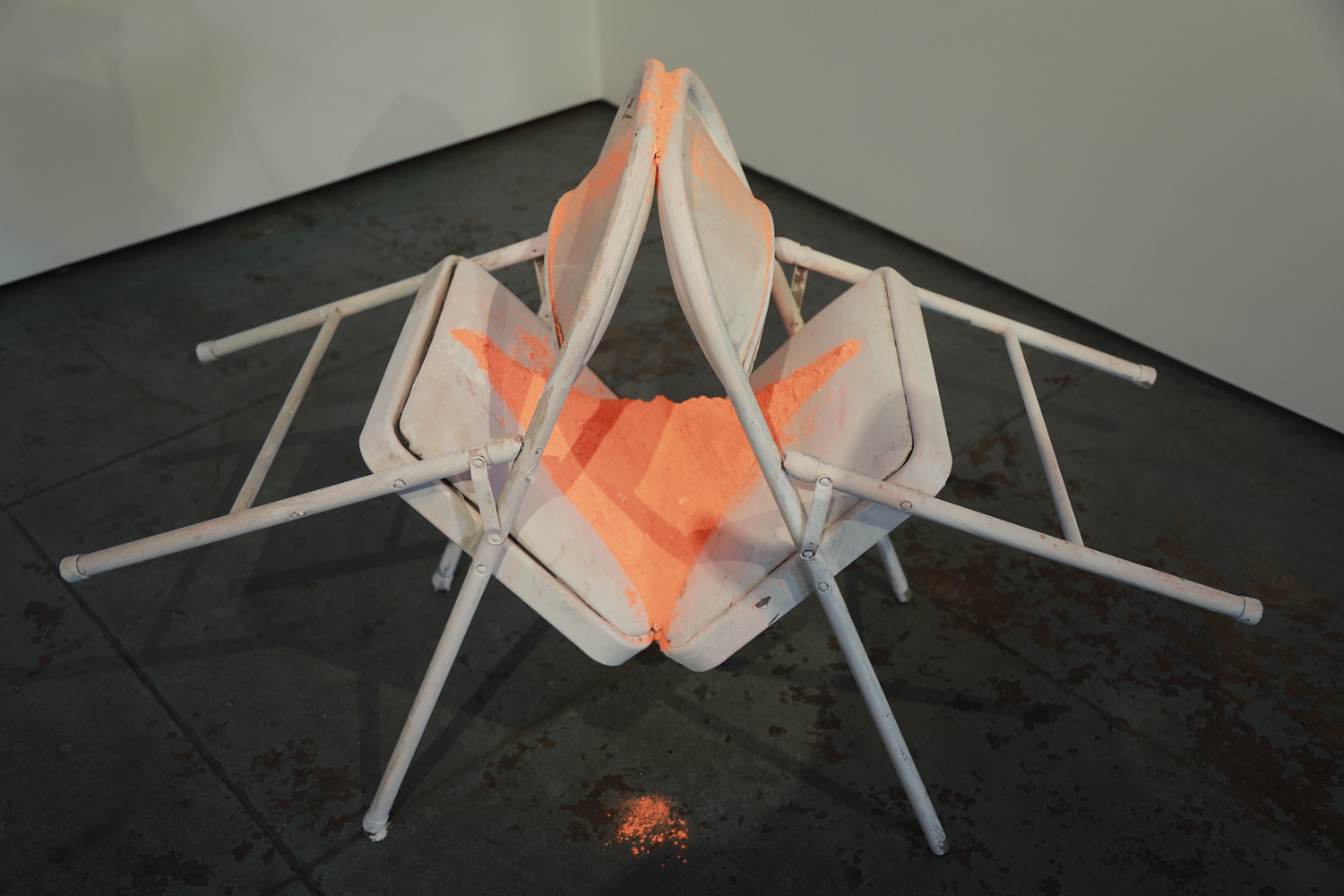 “Wilding Cran Gallery is pleased to present The Good Part, a mixed-media installation by Jeremy Everett. Acting as interventions, the various works on view offer notions of tension, movement, resistance, and corruption. The title of show comes from the sculpture that is comprised of two generic folding chairs positioned face-toface, leaning into each other to create a V-shape with the seats of the chairs. He places a mound of bright orange pigment in the V-shaped space between the chairs, the weight of the pigment balances the objects. The delicate position of the chairs and pigment offers a heightened sense of fragility surrounding the object as contact with the piece could potentially unbalance the scale. About Jeremy Everett Jeremy Everett currently lives and works between Los Angeles and Paris. He has presented solo exhibitions globally at Edouard Malingue Gallery, Hong Kong; Untitled Art Fair, Miami; Wilding Cran Gallery, Los Angeles; Andrew Edlin Gallery, New York; and OFR Galerie, Paris. His work has been included in group exhibitions at Rivington Arms, New York; Petzel Gallery, New York; Kristin Hjellegjerde, London; Granpalazzo, Rome; Sotheby’s, San Francisco; Hooper Projects, Los Angeles; ltd., Los Angeles, and Olga Korper Gallery, Toronto.” 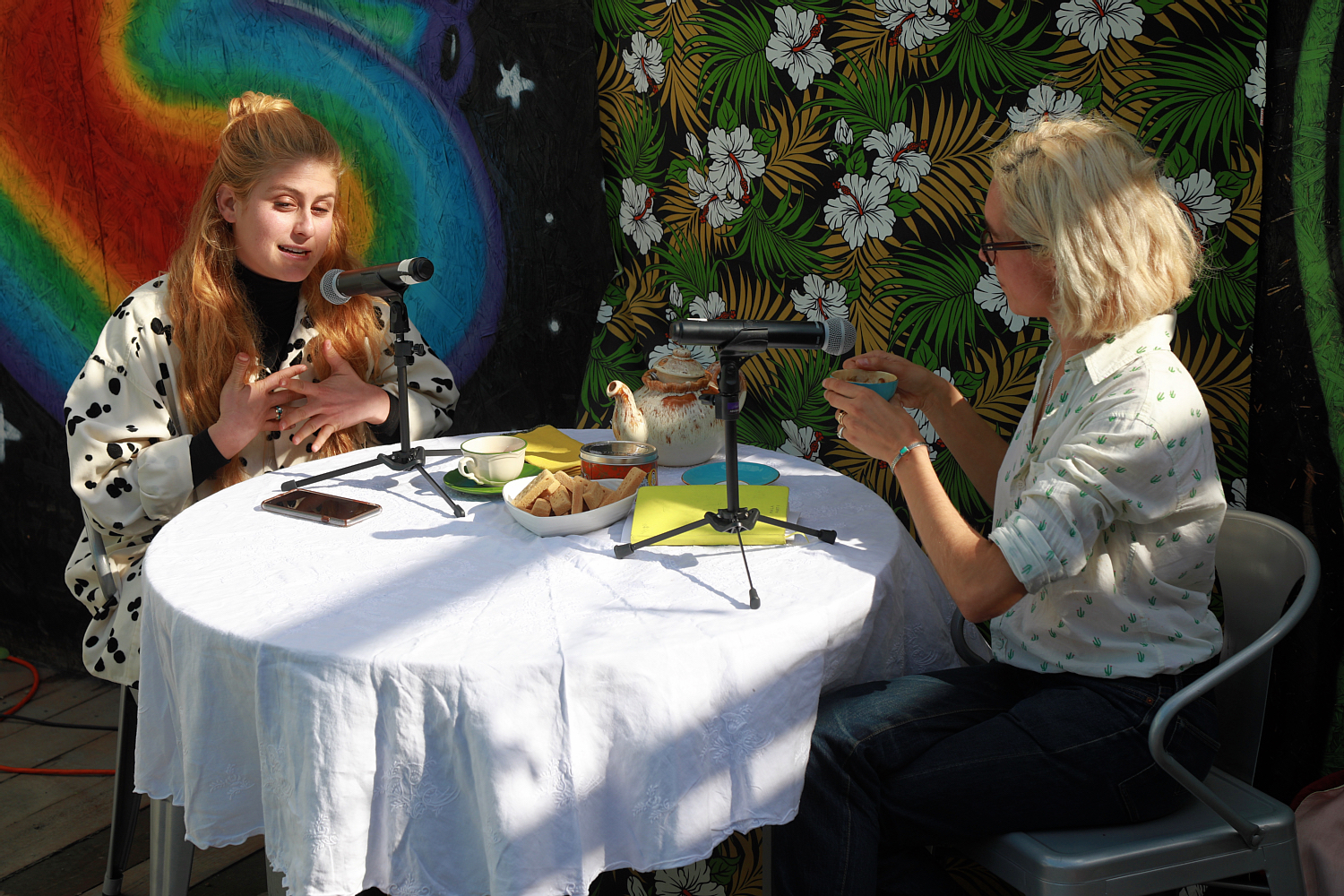 about the artist? London based artist Pia Pack did and took her relocation to Los Angeles as an opportunity to get to know her new city and fellow artists. What Artists Listen To first season explores the soundtracks of Los Angeles female identifying artist’s lives through discussion of tracks on their curated playlist. Inspired by Kim Schoenstadt’s Now Be Here project, Pia decided to focus solely on female identifying Los Angeles artists for the first season of W.A.L.T.

“I love the project because for most artists music has gone hand in hand with their studio practice since the very beginning – it’s a bit like asking to see their dairies. As a listener, it further fleshes out the artists, it’s an insight into their artistic process.“ says creator Pia Pack. The live version will feature Alexandra Grant, Zeal Harris, Cole James, Alison Saar, Shizu Salamando, among others. Pia’s studio work focuses on the way people connect and interact, translating movements and mapping sounds into her artwork. At the centre of her practice is the desire to bring people together. Pia Pack studied fine art in London at Byam Shaw St. Martins School of Art,Wimbledon School of Art, and Hochschule für Künste, Hamburg. She recently completed her MFA at Bath School of Art.

The podcast will launch on 17 March on iTunes, please visit www.whatartistslistento.com for further information and the live version lineup.”