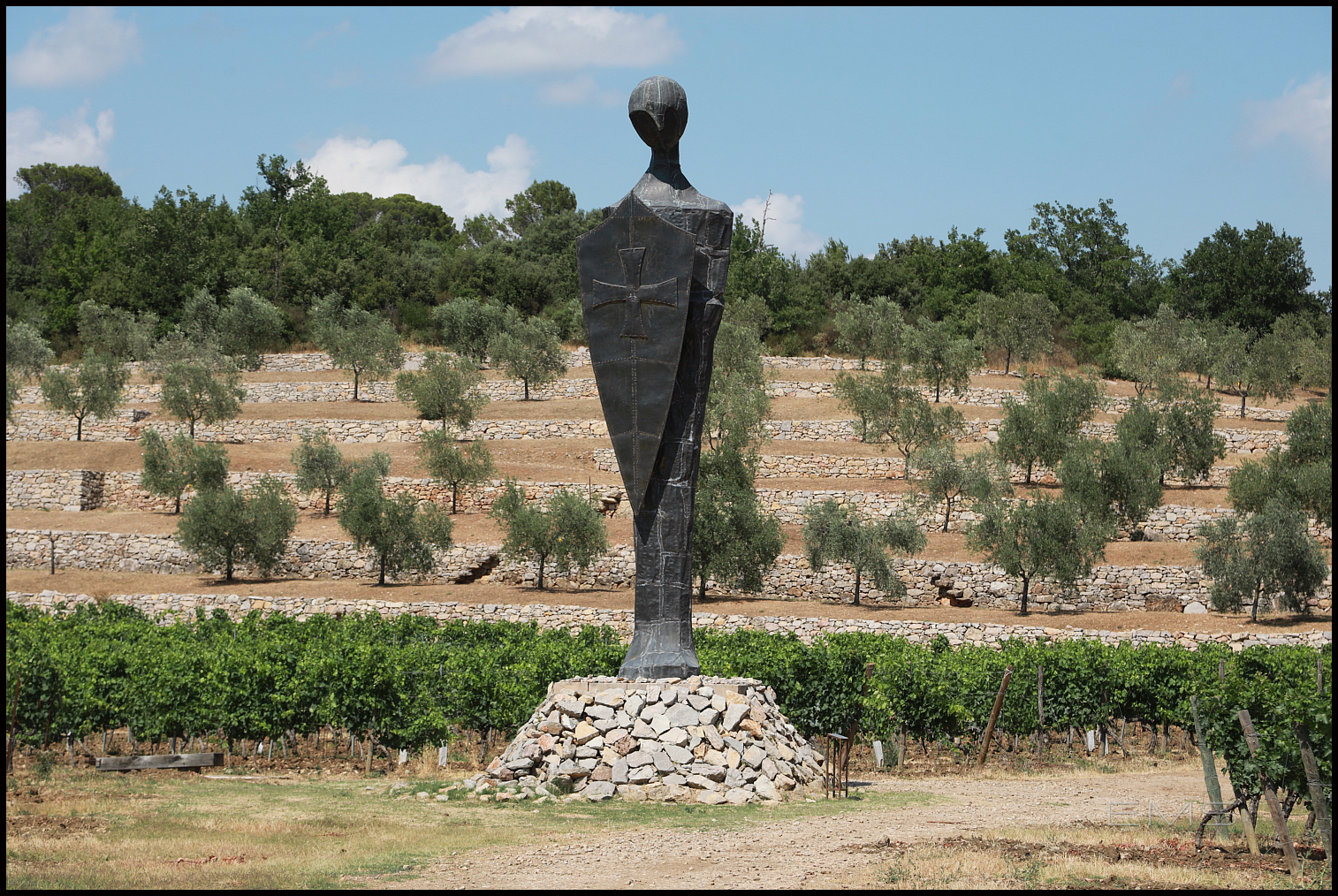 The Permanent Exhibition of Art of the Commanderie de Peyrassol

“Philippe Austruy wished to present works of art protected from badweather. In the beginning, he planned on building only a small chapel to put on display a work of Franck Stella that he particularly liked and which was stored in a small space in the winery. During a lunch, Diane and Bernar Venet suggested him to go further and create a permanent collection. This new artistic entity became an extension of Valerie Bach gallery « La Patinoire Royale », in Brussels.

In one piece, the permanent exhibition of Peyrassol is a vast room with natural lighting coming from the skylight. Its modern design was a real challenge: how to integrate modern architecture at a large scale without removing the intemporality of the historical buildings?

To solve the equation, the new space should not be perceived as a singular separated identity but needed to be designed as a covered space inside the path of the monumental sculpture, a giant hallway where people can wander inside, amid the vines. Constructed like a sculpture, the building breaks the code of classic architecture. There are no doors, no windows, no roof, inspired by the movement of Land Art.
On one side, you will find a monumental mural and on the other side a scree, typical of Peyrassol, these two walls are connected by a gigantic shape of weathering steel, above the ground, highlighting its shape by its horizontality.” – per website

Between the first powered aircraft designed in secret in the town of Muret by Clément Ader, and the first flight in the skies of Blagnac of the A380, flagship of the European aviation industry, more than a century has passed.

To fly across the seas and the continents, first came the aircraft made by Latécoère and Dewoitine, then the Languedoc and the Armagnac.
At the end of the fifties Caravelle, the first French jetliner, proved to be a resounding success. Then in 1969 it was Concorde’s turn to take to the skies for the first time in Blagnac.

These aircraft were followed by the entire Airbus family, affirming Toulouse’s mission to fly higher, faster and farther.
This is also the story of the great pioneers of aviation.

Here, in the birthplace of global civil and military aviation, the Airbus Group laid the foundations of its head office in January 2014 and the commercial successes of Airbus and ATR boost the economy of the Midi-Pyrénées region.
For more than 30 years, the players and witnesses of this industrial, technical and human saga, as well as those who love aircraft and love to fly, have strived for this history to be forever remembered and shared. For the preservation of this historical heritage. 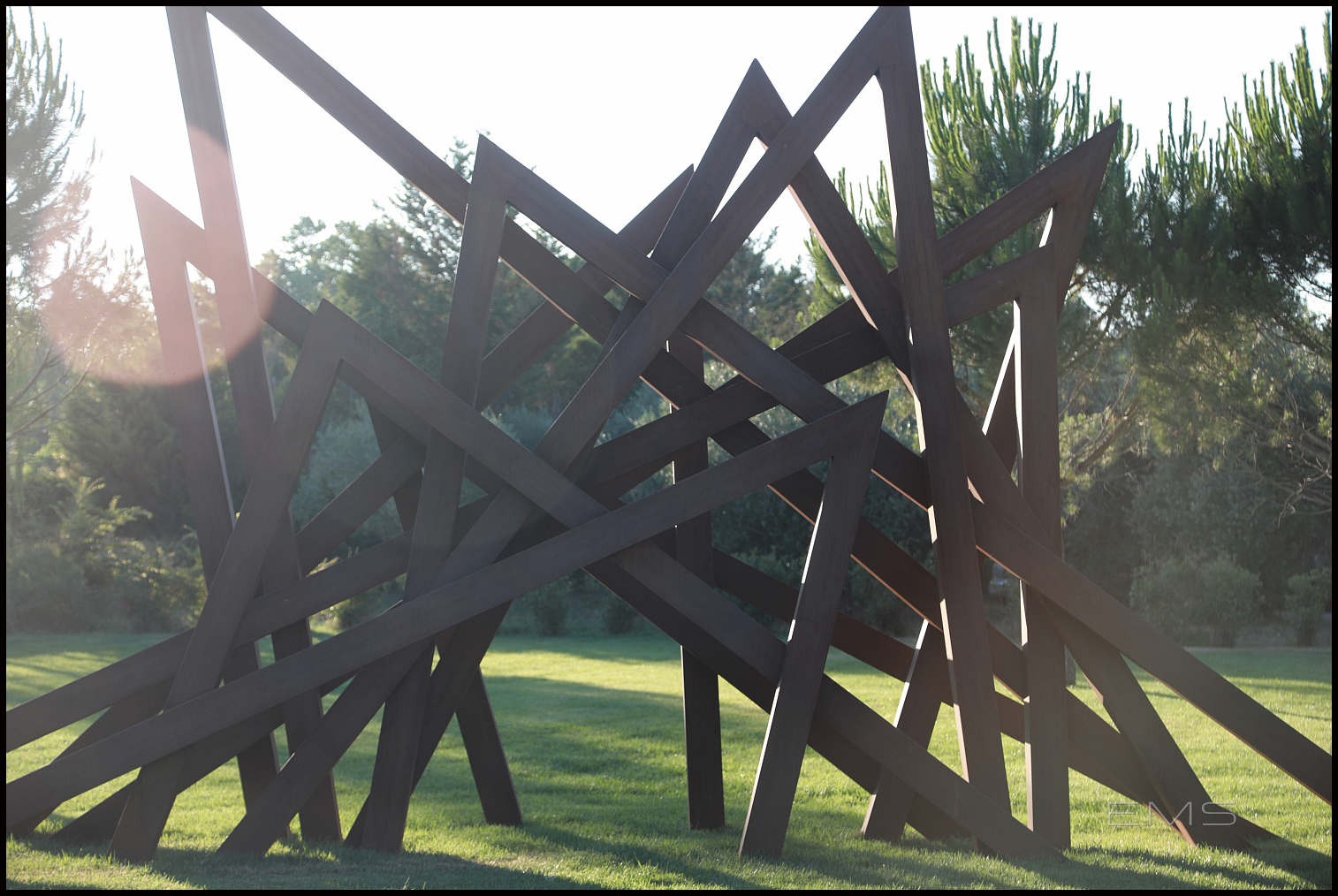 “The Venet Foundation is the culmination of more than fifty years of artistic creation and Bernar Venet’s encounters with an impressive roster of other major artists, who have become his friends, which has led to an extensive collection that is emblematic of minimal and conceptual art. Created in 2014, the Venet Foundation aims to conserve its collection, and to ensure that Bernar Venet’s work is presented in an ideal setting.

The Venet Foundation loans artwork to other cultural institutions around the world, providing access to a larger audience, and hosts annual exhibitions of works by other artists.” – per webiste 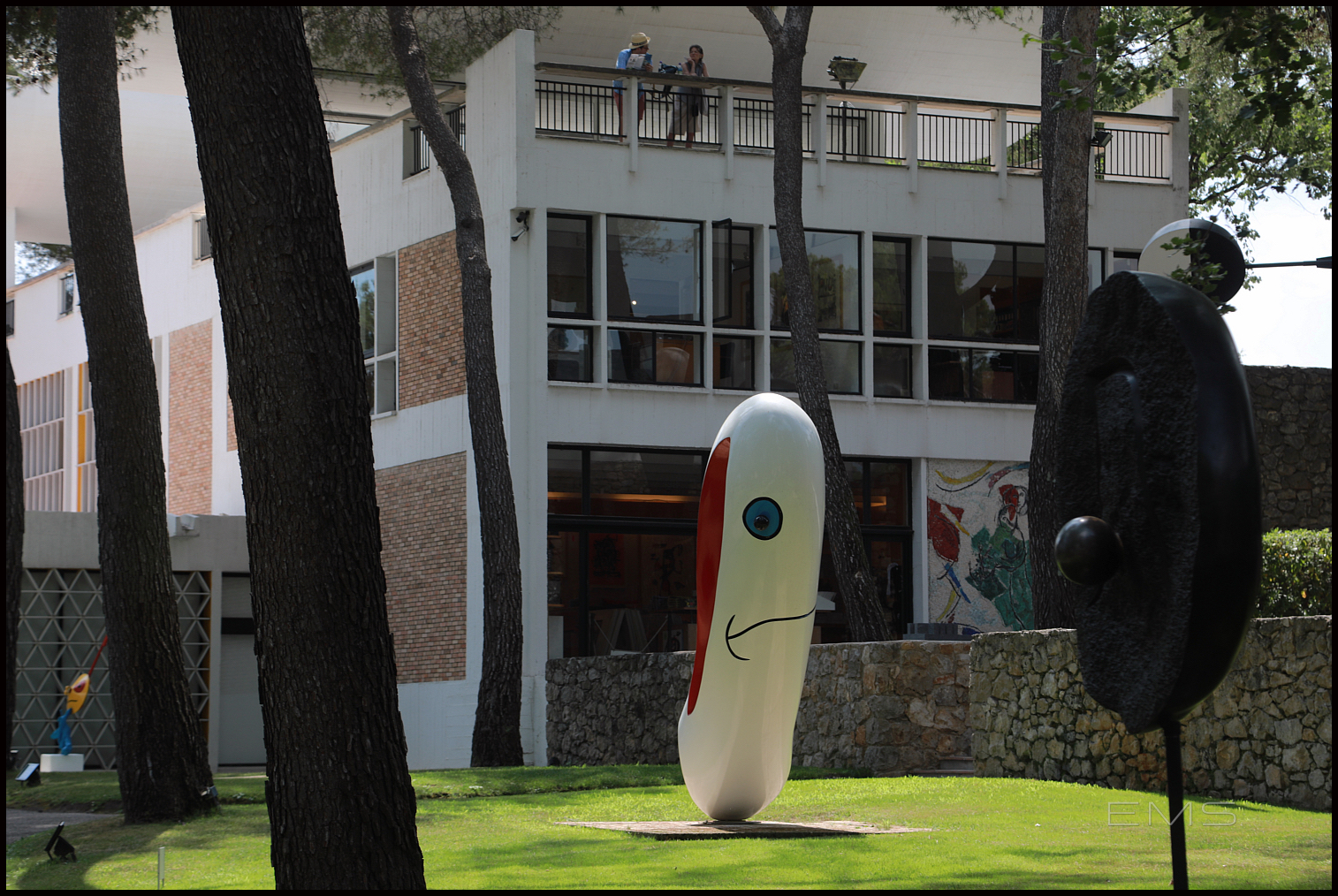 “The Fondation Marguerite et Aimé Maeght is France’s most important private art foundation and among the world-leading cultural institutions. It was created by Aimé and Marguerite Maeght, a visionary couple of publishers and art dealers, who represented and were friends with some of the most important artists of the 20th century, including Joan Miró, Alexander Calder, Fernand Léger, Georges Braque, Alberto Giacometti, Marc Chagall and many others. The Maeght Foundation was inaugurated on July 26, 1964, by Charles de Gaulle’s legendary Culture Minister André Malraux, who was a close friend of the Maeghts. The Foundation was France’s very first private art institution and was modeled after American institutions such as the Guggenheim Foundation, the Barnes Collection or Phillips Collection, which the Maeghts visited during their frequent trips to the United States in the 1950s.

Located near the famous village of Saint-Paul de Vence, 25 km from Nice, the Fondation Maeght receives more than 100,000 visitors every year in a unique architectural complex designed by Josep Lluís Sert, showing modern and contemporary art in all its diversity. Painters and sculptors worked in collaboration with the Catalan architect to create a place where art, nature and architecture blend in perfect harmony. The Foundation’s highlights include the Giacometti courtyard, featuring an exceptional ensemble of sculptures by the Swiss artist, the Miró labyrinth, a whimsical sculpture garden by the Catalan artist, monumental mural mosaics by Marc Chagall and Pierre Tal Coat, a pool designed by Georges Braque as well as a mechanical fountain designed by Pol Bury. Visitors can also enjoy the sculpture garden, with a rotating selection of works by Calder, Takis, Miro, Arp and other, two rooftop terraces with spectacular views, exhibition galleries hosting temporary exhibition as well as selected works from the permanent collection, a consecrated chapel, an art library and a gift and book shop.” – per website 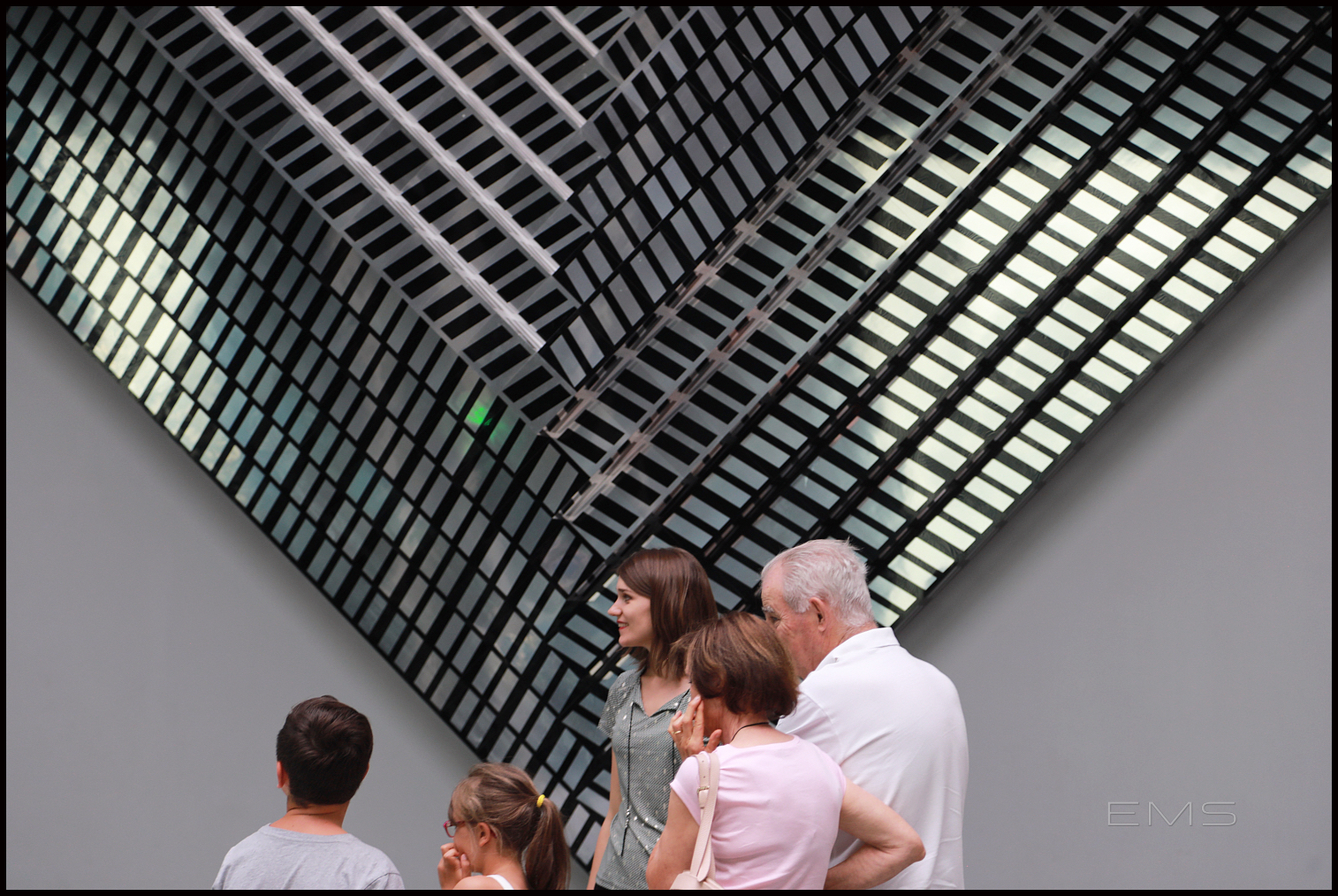 “VICTOR VASARELY is a unique artist in the history of twentieth century art. Famous during his lifetime, he distinguished himself from contemporary art with the creation of a new movement: optical art. The evolution of his life of work is inherently coherent, progressing from graphic art to the artist’s determination to promote a social art that is accessible to all.

Victor Vasarely was born in Pécs, Hungary in 1906. In 1925, after graduating from secondary school, he studied medicine briefly at the University of Budapest. Even though he did not pursue these medical studies past two years, Vasarely acquired a commitment to method, objectivity, science and the thirst for knowledge which would follow him all throughout his life.

In 1929, he enrolled in Muhely, known as the Bauhaus of Budapest. This school, founded by Alexander Bortnyik and modeled on the Bauhaus of Dessau, Germany taught the lessons of artists such as Walter Gropius, Wassily Kandinsky, Paul Klee and Josef Albers. The impact of Bauhaus teachings on Vasarely’s lifetime of work would turn out to be considerable. During this period he discovered Abstract art and was introduced to constructivism. This is when he produced his famous “Etude bleue” and “Etude verte” (1929). He also devised and supported theories which promote art that is less individualistic and more collective, art which adapts to the changing modern world and to the world of industry.

Under the pressure of the Hungarian government at the time, numerous avant-garde movements were being associated with the progressive movement that was developing in politics. Like a number of his compatriots, Vasarely left Hungary and settled in Paris in 1930. He began working as a designer/creative artist at the Havas advertising agency and at Draeger’s, a renowned printer of the time. His graphic work in these agencies and later in Dewambez, allowed him to approach the world of design and aesthetics “while playing (his) role as a plastic artist.”

– for more information on additional images from this event please contact EMS at victorpond@msn.com or Instagram at @ericminhswenson