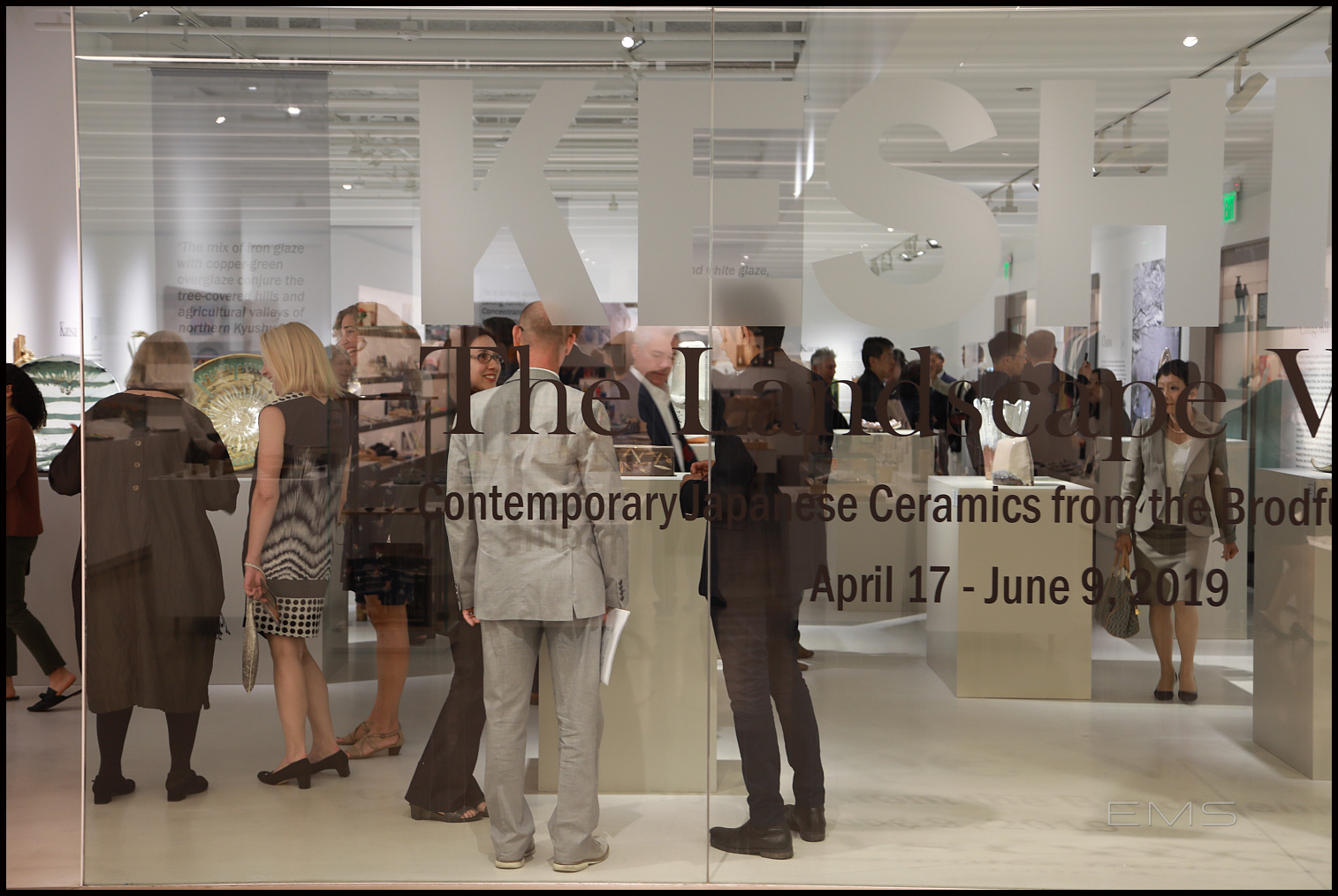 KESHIKI: The Landscape Within Contemporary Japanese Ceramics from the Brodfuehrer Collection. The Japan House. Los Angeles. Photos by EMS

For centuries, Japanese artists and collectors have welcomed the natural imperfections that emerge on ceramic vessels during the firing process. These pools of glaze, scorch markings, cracks and indentations are referred to as the keshiki (‘landscapes’) of a piece, and since the sixteenth century have been celebrated as adding new beauty, depth, and value to the work. In Japanese, “admiring the keshiki” has evolved into a particular way of looking at ceramics. While Japanese ceramics have enticed collectors around the world, one Southern Californian, Gordon Brodfuehrer, has built an exceptional collection that includes styles and techniques from kilns across Japan. KESHIKI: The Landscape Within presents over sixty contemporary ceramic pieces from the Brodfuehrer collection, inviting visitors to join this pioneering collector in his journey around Japan. 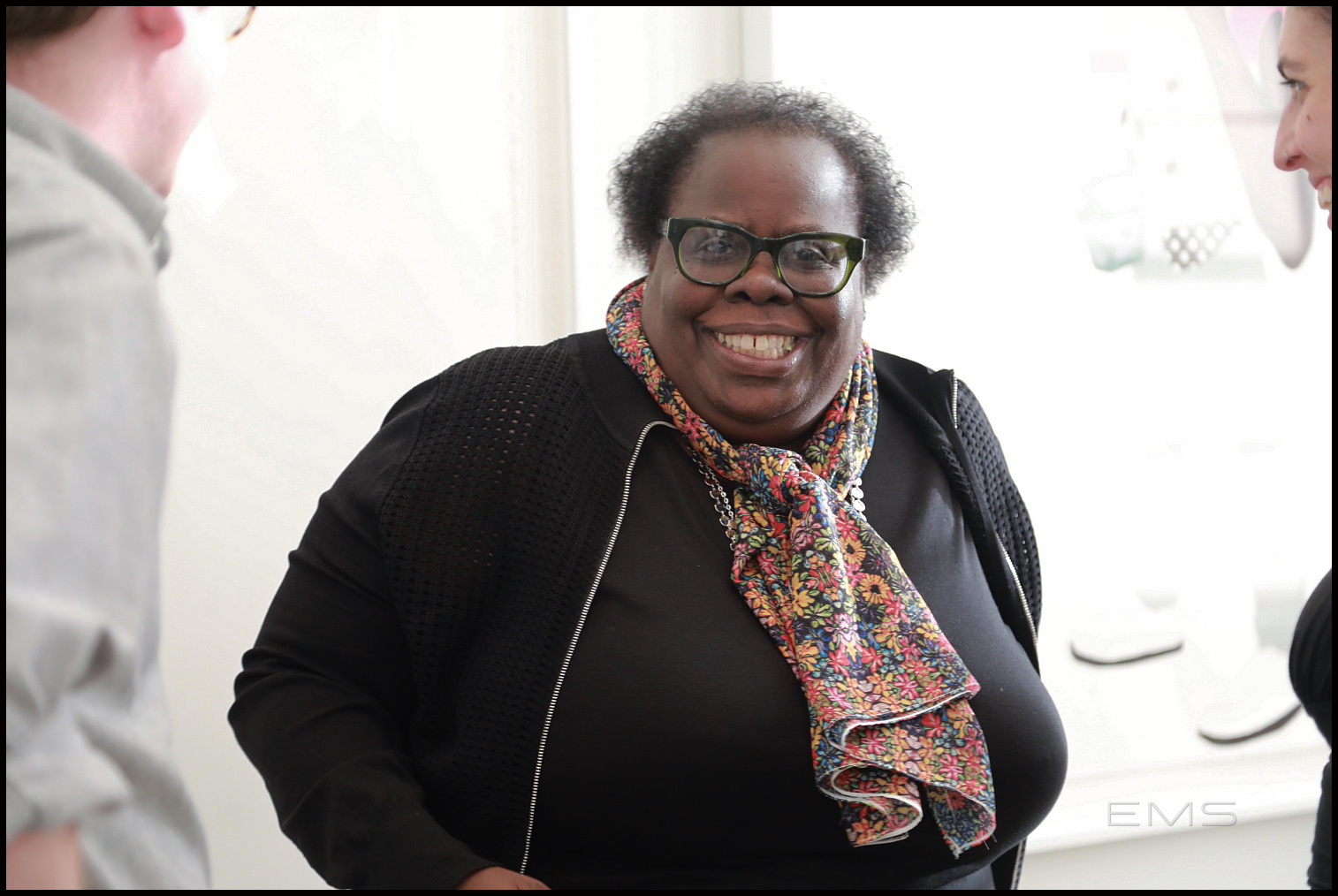 Below is an essay commissioned on the occasion of Roberts’s exhibition by Dr. Cherise Smith of the University of Texas at Austin:

“The fourteen works on display reflect a shift in Roberts’s practice, from collages on paper that depict girls to mixed-media paintings, such as Our Destinies are Bound (2018), in which the artist focuses her gaze on Black boys. In recent years, Roberts has reminded viewers that Black girls are indeed girls whose youth is worthy of protection, whose intelligence is worthy of cultivation, and whose dreams are worthy of fostering, particularly in the moments of #MeToo and #MuteRKelly. In these new works, she turns exclusively to Black boys, whose well being and futures are equally at risk, while deepening her examination of the childhood years of African Americans—an exceedingly treacherous period of our lives. 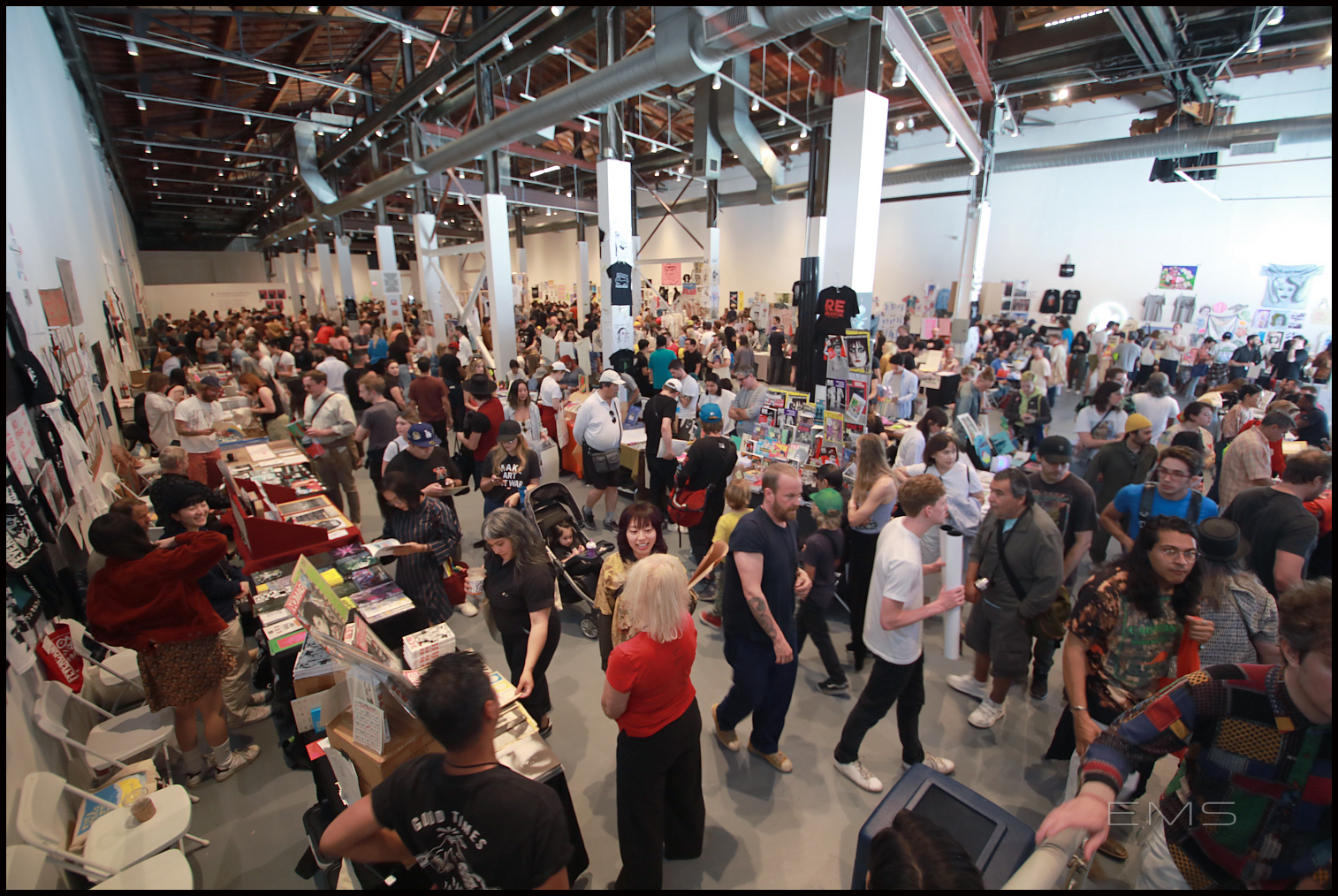 Founded in 1976, Printed Matter, Inc. is the world’s leading non-profit organization dedicated to the dissemination, understanding and appreciation of artists’ books and related publications.

First established in Tribeca by a group of individuals working in the arts (among them artist Sol LeWitt and critic Lucy Lippard), Printed Matter was developed in response to the growing interest in publications made by artists. Starting in the early 60s, many of the pioneering conceptual artists (as well as performance, process, environment, sound and other experimental media artists) began to explore the possibilities of the book form as an artistic medium. Large-edition and economically produced publications allowed experimentation with artworks that were affordable and could circulate outside of the mainstream gallery system. Printed Matter provided a space that championed artists’ books as complex and meaningful artworks, helping bring broader visibility to a medium that was not widely embraced at the time.

After 13 years on Lispenard Street in Tribeca, Printed Matter moved to a location on Wooster Street in SoHo in 1989. The spacious bookshop with large storefront windows allowed for the development of expanded public programming, including more exhibitions and events, and contributed to the cultural vibrancy of the neighborhood. In 2001 Printed Matter made its move to Chelsea, which had since become New York City’s contemporary arts district. In 2015, the store relocated to its current space on 11th Avenue. The new location features a much larger bookstore spread across a ground floor and a large public stairwell leading to a mezzanine level. The space features a dedicated exhibition area, as well as increased office space for its growing staff. Printed Matter’s new home provides a much more comfortable environment for visitors to engage with the ever-growing inventory, and for a busy schedule of public programs.

Artists’ books continue to provide a remarkable reflection of contemporary artistic practices – tracing and even leading many of the most important developments in the historical trajectory. In the face of the ongoing proliferation of digital media and information, there has been an astounding resurgence over the past several years in both artists’ publishing and public interest. In tandem with this truly international phenomenon, Printed Matter founded the NY and LA art fairs (in 2004 and 2013 respectively), which have become the world’s largest venues for the distribution, investigation and celebration of artists books and art publishing. It is thrilling that Printed Matter’s mission continues to be resilient, and remains more relevant than ever. 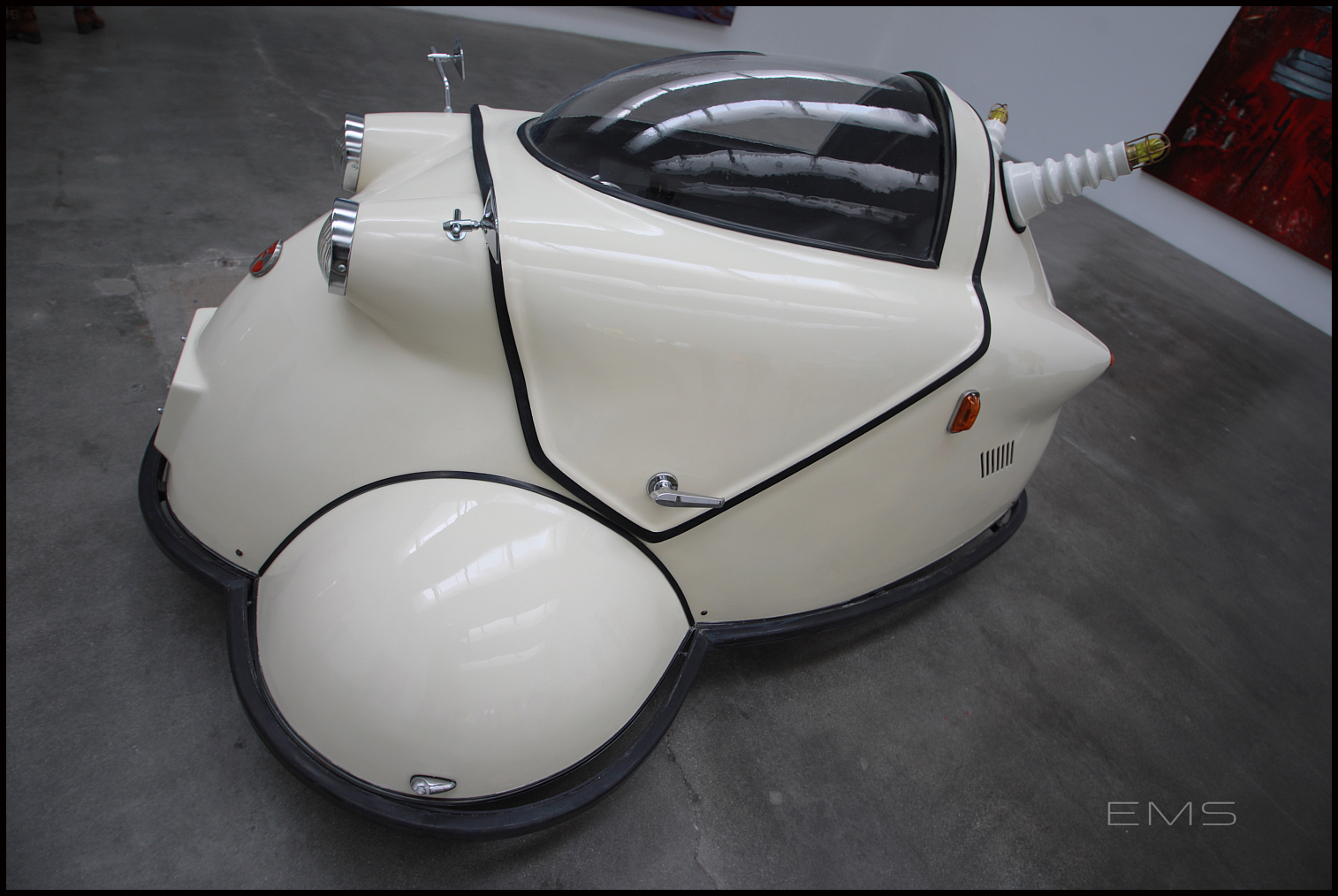 Blum & Poe is pleased to announce the second installment of Parergon: Japanese Art of the 1980s and 1990s, a selected survey exhibition curated by Mika Yoshitake. Focusing on the themes of retro-futurism, noir, satire, and simulation, as well as those that probe national boundaries, the show is presented in two parts at Blum & Poe in Los Angeles. Works from over twenty-five artists including EYE, Kenjiro Okazaki, Mariko Mori, Kodai Nakahara, Masato Nakamura, Yukinori Yanagi, Kenji Yanobe, and Tadanori Yokoo feature media spanning painting, sculpture, performance, noise, video, and photography. A catalogue will be published for the occasion, with artist testimonials and new scholarship by Yoshitake and David Novak, award-winning author of Japanoise: Music at the Edge of Circulation (Duke University Press Books, 2013).

Part II of Parergon expands on the thematic territories explored in Part I, with seminal installations and sculptures from the era and performances by renowned figures of noise, sound, and electro-acoustic music genres. Kenji Yanobe’s Tanking Machine (Rebirth) (2019) is a darkly humorous, interactive, sci-fi sculpture first presented in 1989 that addresses the ever-present reality of nuclear crisis through a retro-futurist narrative. Influential multimedia artist, Kodai Nakahara’s bizarre installations of figurine-like marble stones and brightly, suspended spheres reflect a humorous take on sculpture’s “post-medium” condition.  As an intellectual and artist, Kenjiro Okazaki’s practice engages with theories of perception through interdisciplinary genres spanning architecture, literary theory, painting, reliefs, sculpture, robotics, and dance. Trained in both Japan and the U.S., Yukinori Yanagi’s large-scale and site-specific installations interrogate the politics of institutional borders and boundaries often drawing from semiotic systems of symbolic imagery. Psychedelic ’60s graphic designer Tadanori Yokoo revisits strategies of historical pastiche with his figurative noir paintings that hang alongside his cut-canvas portraits of Dada figures, as well as ceramic depictions of spiritual mediums. Finally, a dedicated Japanese noise archive of photography, journals, and vinyl records from Tokyo’s experimental underground will also be featured on the second floor giving historical context to the live performances.

The exhibition title makes reference to the gallery in Tokyo (Gallery Parergon, 1981-1987) that introduced many artists associated with the New Wave phenomenon, its name attributed to Jacques Derrida’s essay from 1978 which questioned the “framework” of art, influential to artists and critics during the period. Parergon brings together some of the most enigmatic works that were first generated during a rich two-decade period that are pivotal to the way we perceive and understand contemporary Japanese art today. In the aftermath of the conceptual reconsideration of the object and relationality spearheaded by Mono-ha in the 1970s, this era opened up new critical engagements with language and medium where artists explored expansions in installation, performance, and experimental multi-genre practices.