It’s all part of the vision of composer Charlemagne Palestine – whose fantastical new exhibition, Ccornuuoorphanossccopiaee Aanorphansshhornoffplentyyy, is his biggest yet. In addition to the 18,000 animals, there are also several TVs displaying Palestine’s sound and performance pieces from the 1970s, such as Internal Tantrum (1975), an intense and emotive work for voice – and Island Song (1976), featuring footage shot by Palestine while motorcycling around an island off the coast of Newfoundland.

Palestine performed a powerful, chiming piano piece at the opening last week, on a Bösendorfer covered with animals and sumptuous fabrics in different hues. “I can’t imagine just sitting down and playing a non-devotional instrument where you have not created a world,” he says. “I create a mise-en-scène each time I give a performance.”

The stuffed animals covering the piano aren’t just a whimsical garnish – they are essential, part of the work. “I create a unique environment and a unique atmosphere that then you can be transported to another place, differently than you would for jazz or classical music or rock’n’roll,” Palestine explains. “Each of those genres create their own world, and have their own world. Mine that I’ve created – which is sort of unique – dates now a long time I’ve been doing it. And it certainly soothes me; I couldn’t imagine doing it without it. But I now have a big following, and it soothes them too. So it soothes us all.”

Palestine – who was born in Brooklyn, but lives in Belgium – is sporting a bright red outfit with a black-and-white striped shirt, a psychedelic scarf, and a red hat with what looks like antlers coming out of his head. He is now 71 years old, but has more energy than most people half his age. He has been creating works with animal toys in parallel with his music since the 1960s – well before artists like Jeff Koons and the late Mike Kelley (Palestine’s show in Los Angeles is sponsored by the Mike Kelley Foundation.)

Growing up in Brooklyn in the 1940s and 1950s, Palestine adored his teddy bears, finding to his horror that his mother had thrown them away. “My mother, when I was around 10 or 11, thought I was too old to have these kinds of toys,” Palestine recalled ruefully. “One day when I was at school, she took all my animals and threw them out. I came back and I no longer had any of my friends – my cuddly friends.”

These days Palestine has all of his cuddly friends. “I call them divinities,” Palestine says. “But I use it as a sacred secular term, meaning I believe it’s sacred – it really is important to me and gives me all the reinforcement that sacred things can without it being dogmatic. My religion has no name. Maybe ‘Meshugahland’. You know the word ‘meshugah’? It means crazy. But it means ‘crazy’ in a nicer way than the word ‘crazy’ means. ‘Crazy’ is a crass word. In Yiddish, when you say ‘meshugah’, it has kind of an embrace – you sort of embrace somebody with that. It still means ‘crazy’, but it’s embracing.” (A recent show by Palestine at New York’s Jewish Museum was titled Bear Mitzvah in Meshugahland.)

There is a bit of a religious inspiration too. “Ganesh [the Hindu elephant god] is one of my favorite divinities of all the different cultures,” Palestine says. “Polytheism, where you have many gods and goddesses … When I took the teddy bear that comes from my neighborhood in Brooklyn – that’s where it was invented – it became kind of a character, like out of the Ramayana or something, but without a story. For me here, there are 18,000 characters in this show. We have 18,000 divinities.”

He ambles back into the gallery, into the kaleidoscopic frenzy of stuffed animals. “This was also something that I learned from indigenous peoples, and Hindu culture, Aboriginal culture, and Polynesian culture, Native American culture,” he explains. “When you have a sort of soulmate animal, they’re with you for all your life. It’s something sacred and something continuous. It’s not just a childish, childlike, young person, baby-growing-up, transitional object … Your animal spirit stays with you.” 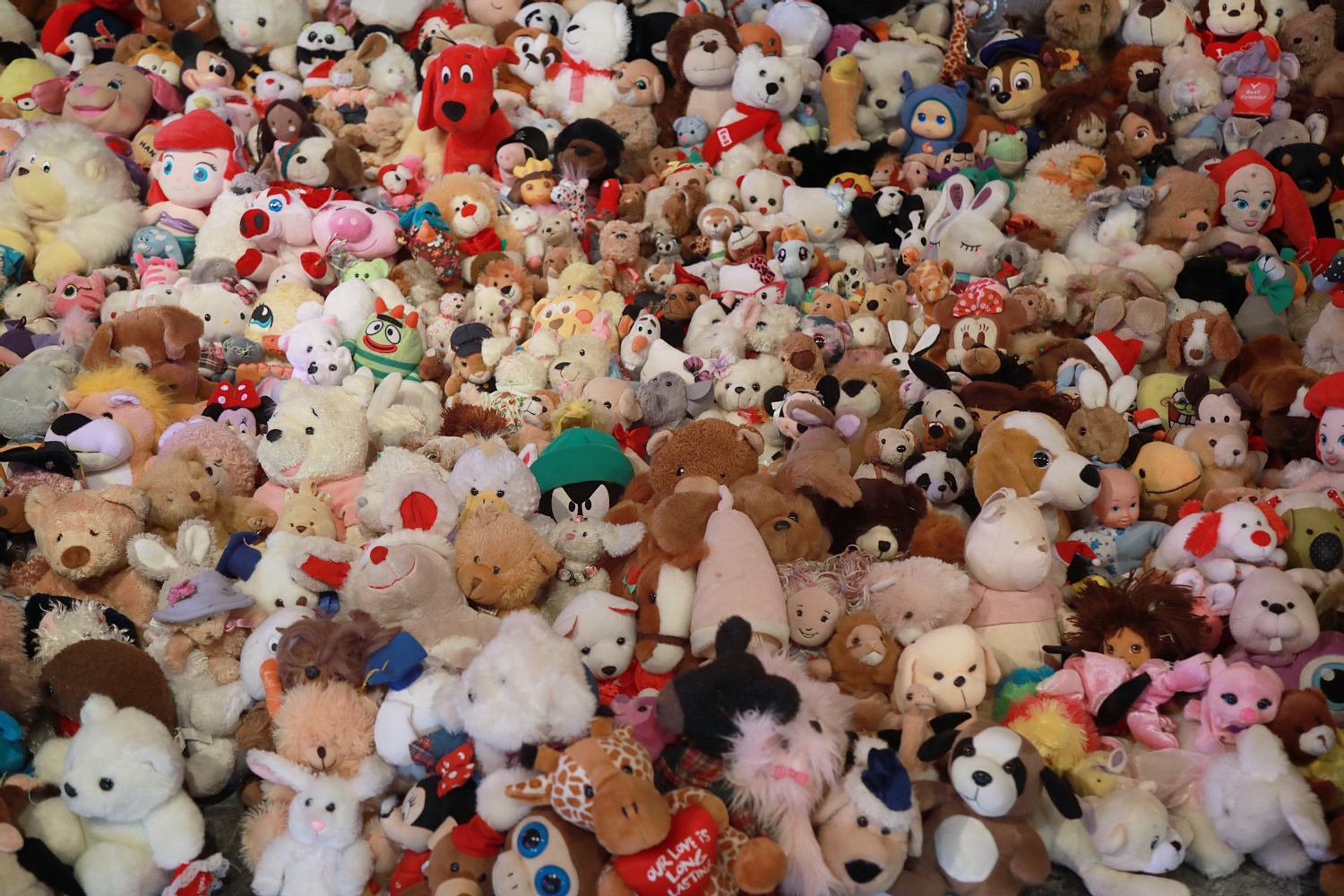 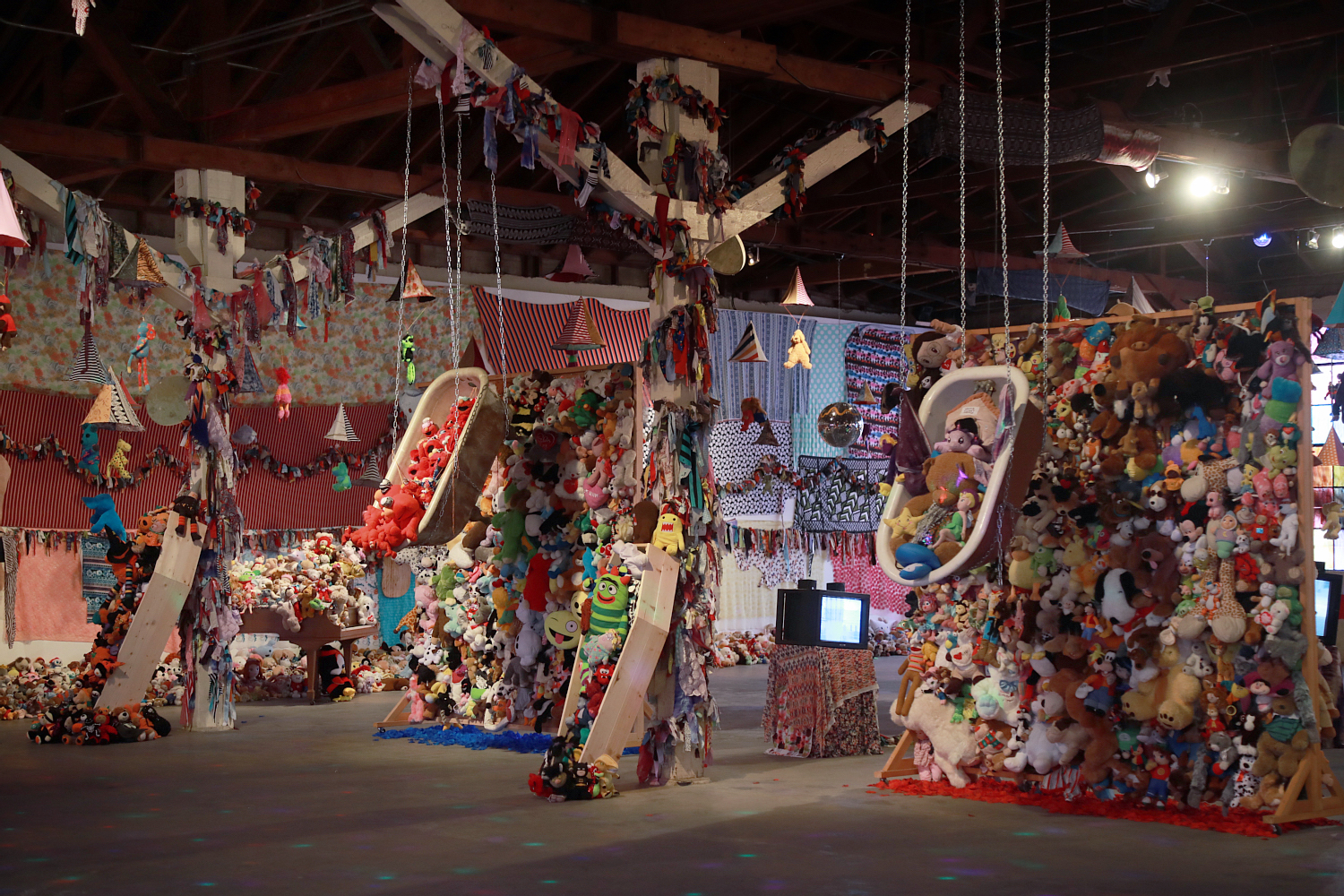