(per website) Beverly Hills, CA (September 12, 2018) — UTA Fine Arts is proud to present Cao / Humanity, a new exhibition by the acclaimed Chinese artist and activist Ai Weiwei, which will open at UTA Artist Space on October 4th. Cao / Humanity, in tandem with two other Los Angeles exhibitions, marks an exciting milestone for both Ai and the city of Los Angeles, where he is exhibiting for the first time. Having designed the new UTA Artist Space location in Beverly Hills, Ai’s Cao / Humanity will offer a one-of-a-kind experience for visitors—an expansive celebration of his artistic practice in a space he himself designed, the only architectural project he’s undertaken in the United States.

Central to the exhibition will be a new collective performance project by Ai Weiwei: Humanity. This global campaign is a reaction to the tens of millions displaced by war, famine and climate crises, and gives a personal and group voice in support of the idea that humanity is one. Visitors to UTA Artist Space will have the opportunity to record a reading of an excerpt from Ai’s book Humanity in the gallery. Those messages will then be collected and presented publicly at UTA Artist Space through a video projection updated daily. The project seeks to involve people from all backgrounds, and Ai Weiwei invites people from anywhere to record themselves on social media and lend their voice.

As with Humanity, the works on view in the exhibition embody the fundamental humanity and energy of Ai’s art—a power only magnified in the context of Los Angeles. Home to a thriving population of immigrants, including many from China, and sitting nearly exactly opposite Beijing across the span of the Pacific, it’s a fitting environment for Ai’s art. And Cao presents a wide range of his work, from the iconic middle finger motif wallpapered through the space and the glass sculpture Up Yours(2018), to the massive Iron Tree Trunk (2015), a collection of individual pieces welded together into a deceptively life-like form, weighs nearly two tons.

The exhibition’s title, however, refers to a much smaller plant. “Cao” means “grass” in Mandarin, but with a shift in the intonation it can also be an expletive, to be employed in the very most pejorative sense (e.g., it is often followed by “your mother”). In one sense, this is a gesture toward a code-speak employed by dissidents on the Chinese internet. Taken another way, we are reminded of the simple fact that there is no plant more abused by us than grass, which, even when lovingly cared for, is always being chopped up and trampled on, or insulted by preening neighbors. And yet grass is everywhere, ubiquitous, endlessly resilient and quietly beautiful at the lower margins of the frame.

And so in the center of the exhibition is the sculpture Cao (2014), which stands less than eight inches tall but is no less monumental for it. It’s comprised of 727 individual tufts, sculpted in marble, which fill the center of the space. Where the statue or the column rises up, here the marble sprawls out horizontally, the stone’s implications of nobility concentrated not in a single heroic figure but in thousands of anonymous blades—each valuable, each possessed of dignity and worth.

Also rendered in marble is a security camera, Camera with Plinth (2018), modeled after the 20-odd devices strung up by the police around Ai’s home in Beijing after his arrest in 2011, and a replica of a traditional Chinese lantern, Marble Lantern (2014), which Ai hung by the cameras in a mocking acknowledgement of his surveillance. Another piece that gestures towards the authoritarian state is Ceiling Lamp with Stars (2014), which highlights the Communist Party elite of the ‘50s and ‘60s, when such lamps were found only in the homes of high-ranking officials—a time when Ai’s father, the renowned poet Ai Qing, was exiled for political dissent.  Then there are Marble Doors (2012), a jumble of doors familiar from the construction (and destruction) sites that litter the rapidly expanding landscapes of China’s growing megalopolises, and Hands Without Bodies (2018), which explicitly removes the implication of genuine affection from the gesture, the people beyond vanished into pure transaction.

Marble, in all its haughty glory, is apparent even from a distance—the very fact of the material is immediately striking. Ai’s works in porcelain, which round out Cao, feature a similar process in reverse. Where the familiarity of marble is thrown into immediate juxtaposition with the forms that it’s been given, Ai’s porcelain plates and vases are immediately, comfortingly familiar. It’s only when you’re close enough, and can clearly view the figures, that Blue-and-White Porcelain Plates (2017) can be seen to track the experiences of migrants Ai encountered while shooting Human Flow. These are the trials of Odysseus, seen today in the lives of Syrians, Iraqis, Libyans, fleeing war across the sea—a theme seen again in the towering Vases with Refugee Motif as a Pillar (2017).

The sum of all of these works is a powerful survey of the breadth and depth of Ai’s work over the years—not only his empathy for the individual in a world bent on control, but the particularly potent manifestation of that empathy through wit, tenacity, hope, and the conviction that the individual is not subordinate to the whole, but integral to it. Cao / Humanity is an affirmation of freedom, expression, and individuality, and a fitting introduction of Ai’s work to Los Angeles. 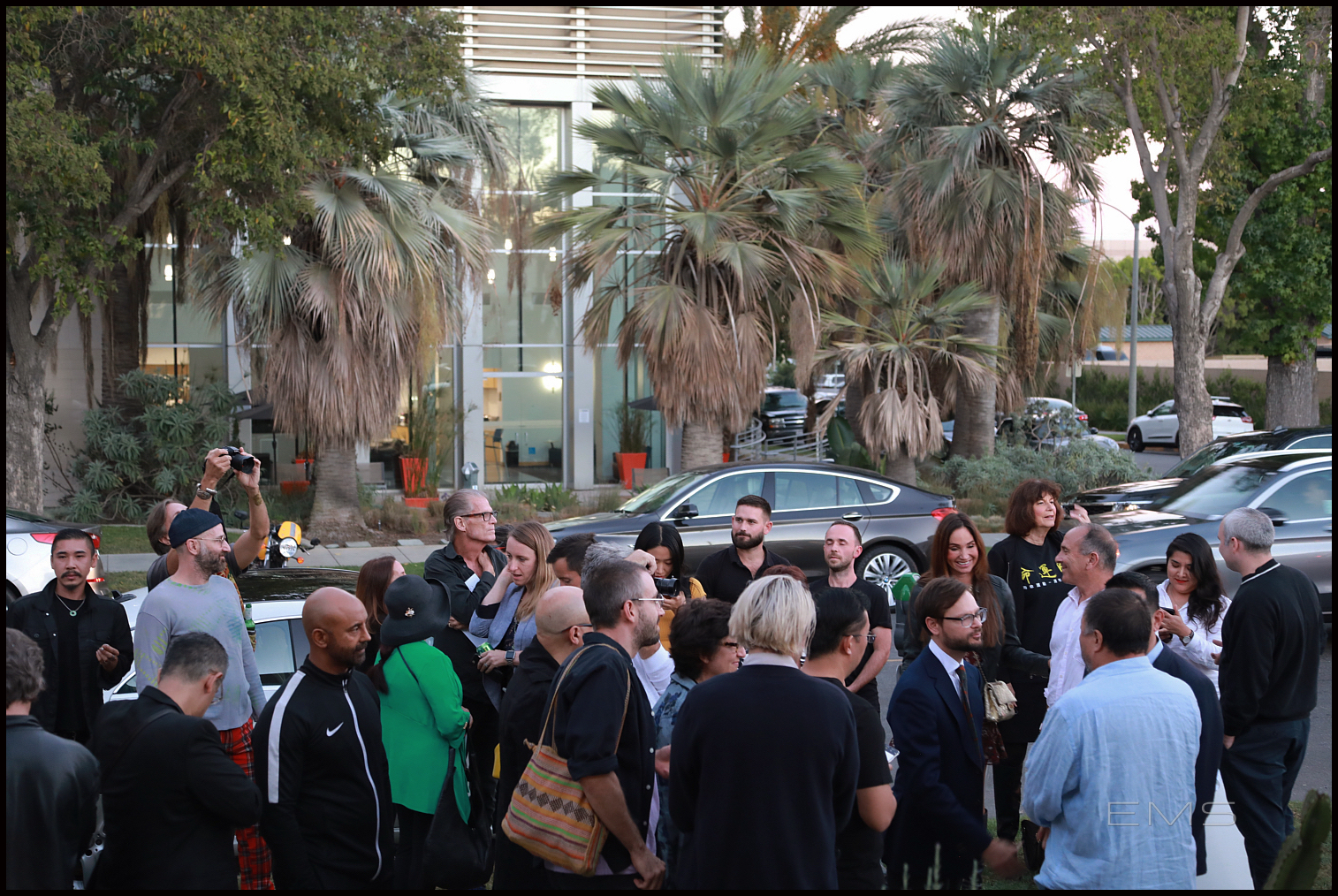 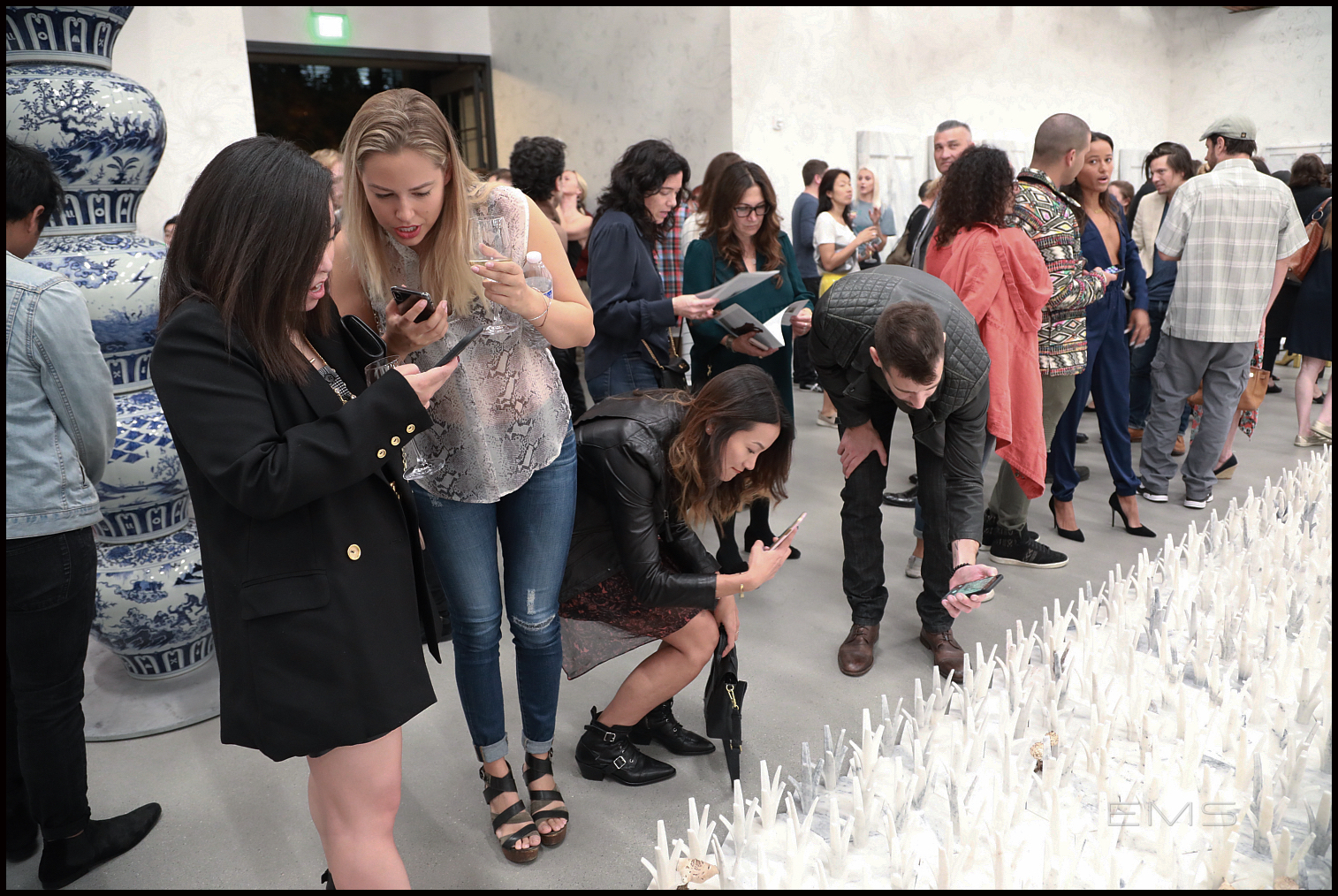